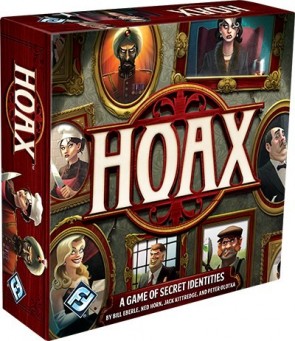 The best liar wins in Hoax, a fast-paced party game of secret identities designed by, Bill Eberle, Jack Kittredge, Ned Horn, and Peter Olotka. When an unscrupulous business magnate meets an undignified end, a fierce competition for his estate begins. The inheritance is legally promised to whoever can prove that he is just as clever, deceitful, and ruthless as the deceased magnate. Therefore the greedy members of the magnate’s inner circle engage in a heated struggle to lie, cheat, accuse, outwit, and manipulate their way to wealth.

Each player in Hoax takes on one of seven secret identities, from the resentful chef to the ambitious son-in-law, and attempts to make the other players believe that they are actually someone else. Each turn you can claim a privilege (whether or not its actually yours to claim), investigate another player, or make an accusation. You can be eliminated by making false accusations or getting caught in a lie. Victory goes to the player who can outlast all the others, demonstrating that he is the most devious, scheming competitor in the game.

Isn't that the Eon Crew?

VonTush replied the topic: #207640 31 Jul 2015 17:19
Hmm...Once again it seems that group was a bit ahead of their time considering it looks like Hoax is the game that at least inspired Coup.

Cranberries replied the topic: #207693 01 Aug 2015 20:36
I was hoping someone had come up with an elaborate prank about an upcoming FFG game that didn't really exist.

And, Coup is a complete and obvious rip-off of Hoax. It's incredibly obnoxious that the designers didn't give any mention or credit to Olotka and crew.

san il defanso replied the topic: #207897 03 Aug 2015 23:47
I'm really excited about this, and I'm glad it'll be a cheapie. It's another one of those weird Future Pastimes designs. I'm glad someone chased it down to reprint it.

engelstein wrote: Nice! Hoax was mainstay of our group in college (early 80's).

And, Coup is a complete and obvious rip-off of Hoax. It's incredibly obnoxious that the designers didn't give any mention or credit to Olotka and crew.

The designer of Coup posted on BGG that Hoax was unknown to them until after designing Coup.

I'd like to give Hoax a try to see how they compare. Coup didn't grab me as much as some other games in the bluffing genre.
Read More...