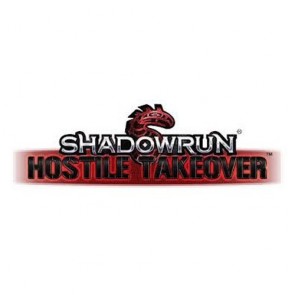 In Shadowrun: Hostile Takeover, players assume the role of megacorporations attempting to assert dominance over the city of Seattle.

Shadowrun: Hostile Takeover is a game of intrigue, shifting alliances, and secretive schemes in the most famous futuristic megaplex of Shadowrun's Sixth World. The most wealthy and influential megacorps of the city contend for dominance of Seattle, and they use shady dealings and deniable assets to wage a war in the shadows for supremacy.

Shadowrun: Hostile Takeover is a Euro-style board game with a strong, immersive theme running through every aspect.

It's basically being marketed as "Lords of Waterdeep" but more gritty. I'm all about it.

MacDirk Diggler replied the topic: #207651 31 Jul 2015 20:43
Please explain what you mean by "more gritty". What could be more gritty than placing a meeple on the Yawning Portsl?

Alastair MacDirk wrote: Please explain what you mean by "more gritty". What could be more gritty than placing a meeple on the Yawning Portsl?

All it takes is a coat of paint to impress some folks, I guess.

SuperflyPete replied the topic: #207687 01 Aug 2015 17:33
Trust me, as a long time Shadowrunner, I'm the first to tell you that this sounds like it's going to have to go out of its way to convince me that it's worth buying. And also, as a Shadowrunner, I'd also have to say that resource management is a huge part...if you run out of Cram at the wrong time, you're fucked.
Read More...