Dungeoneer: Tomb of the Lich Lord 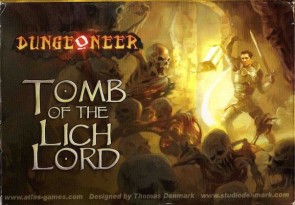 The Lich Lord has returned! And he has released the dead from their wormy graves. Now these undead hordes are stalking the land. The call has gone out for great heroes to stop this evil plague ... are you brave enough to enter the Tomb of the Lich Lord?

Tomb of the Lich Lord is a two- to four-player Dungeoneer card game. Your character explores a wilderness that you build with map cards, while fighting monsters, completing quests, and leveling up along the way. Tomb of the Lich Lord -- the first set for Dungeoneer -- features 110 new Dungeoneer cards, including undead-themed monsters and six new heroes for your Dungeoneer game: Necrowarrior, Necromancer, Dwarf Avenger, Darkling Rogue, Human Paladin, and Elf Sorceress. The expansion sets can be played as stand-alone games or mixed in with the original for more dungeon-delving fun!

5 stars
(1)
4 stars
(1)
3 stars
(0)
2 stars
(1)
1 star
(0)
Rating
3.7
Already have an account? Log in now or Create an account
Awesome pick up and play dungeoncrawl
November 26, 2008
Rating
5.0
Relatively easy to pick up and great fun to play. Reminded me of the KODT: HACK! game that came out so many years ago.
R
Rliyen Top 50 Reviewer 8 reviews
Comments (0) | Was this review helpful to you? 0 0
Fun is better than anything else
September 22, 2008
Rating
4.0
I used to play this game all the time with my ex-girlfriend, she wouldn't play anything else; it was always scrabble, rummy and this, so you get the picture.
Sure, it's no Descent pocket size, that statement is a contradiction in itself but rather you get a nifty little game that can be carried anywhere and played by total newbies and still have a fun time. Isn't that what gaming's all about: fun?
J
joseaguerof Top 50 Reviewer 19 reviews
Comments (0) | Was this review helpful to you? 0 0
Totally lichin'
August 15, 2008
Rating
2.0
I played Dungeoneer once. It sounded cool: Pocket sized Descent where everybody gets to be a hero AND play evil Overlord-like cards on the other players. But it wasn't cool. It was rather ho-hum.

Each player receives a quest at the beginning of the game and you're trying to complete your quest to win the game. The quests require you to go to a specific room and do a specific thing. You build the dungeon as you play, drawing from a pile of dungeon cards and placing it on the table connected to a room already played. The problem is you can wait the entire game for your card to show up so you can complete your dumb quest, so it's luck of the draw (literally) as to who gets their quest room to come up first.

There is a variant where you lay out all the dungeon cards first, but none of us were interested enough after our first game to give the variant a shot. Also I don't recall the characters really being all that different.

So while the game has some good ideas - everybody's a hero and the villain - the game fell way short of my expectations.
M
metalface13 Top 50 Reviewer 16 reviews
Comments (0) | Was this review helpful to you? 0 0
Discuss this article
Log in to comment
Posts in discussion: Dungeoneer: Tomb of the Lich Lord