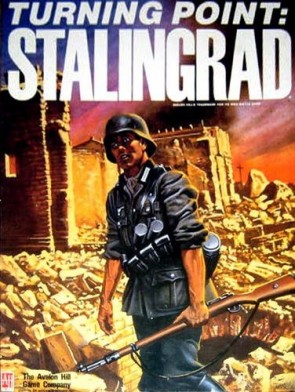 Don Greenwood's classic wargame of the battle of Stalingrad.

Turning Point: Stalingrad uses the area-impulse mechanics first presented in Storm Over Arnhem and later used in Breakout Normandy as well as other more recent games. Movement costs give zone of control rules a unique twist in this bloddy battle of attrition, infiltration, and urban warfare. Out of print but still available on the secondary market at reasonable prices, Turning Point: Stalingrad is a must have for Eastern Front wargamers.

Rating
4.0
Already have an account? Log in now or Create an account
Decent Stalingrad
August 15, 2008
Rating
4.0
First off I think all four games published by AH in their Area Impulse series are great. Many people try to rank these games, usually with "Turning Point: Stalingrad" (TP:S from here on) or "Thunder at Cassino" (TaC) coming in last. However, each game is quite unique in itself, so comparing them directly is really buttocks.

The core of the Area Impulse games consists of players alternating in taking an impulse, i.e. fire or movement with any units starting in one area. After these units have taken their action, they are flipped over to the 'spent' side, which usually has a lower defense value making 'spent' units easier targets. That's simple, but players should still carefully plot their moves to avoid units getting smashed in an immediate counterattack.

The advantages of the Area Impulse system are, that combat is simple, because you only take two numbers, add a couple of modifiers (no more than five) and roll four dice (two per player). Furthermore the alternation of player actions reduce downtime and create a very dynamic and realistic play and battle progress. An added bonus is that the map having no hexes and being quite vivid, which might attract casual wargamers.

After "Storm over Arnhem" (SoA) and TaC which featured combat on a bigger tactical scale, it is unique for TP:S and later "Breakout: Normandy" (B:N) to depict a whole battle on an operational scale. Personally I think the Area Impulse system work best on a tactical scale, but nevertheless TP:S works well, too. The second unique aspect of TP:S is that units remain 'spent' for more turn, depending on their combat performance. Results vary from overrun (0 turns delay) to disastrously repulsed attack (4 turns delay). The randomly determined length of day and night was also revolutionized here.

TP:S also has a slightly above standard amount of chrome rules, for example German and Soviet artillery are resolved completely differently and Soviet reinforcements have to cross the Volga first which is more difficult if the Germans occupy observation points across the city or at the shore.

My two points of critique are that firstly the Soviet have to play really good to NOT lose the game after the first week, because if the Germans do as well as they did historically they'll win too soon. The Germans are more powerful than the Soviets on the first week of the campaign, but taking just the Southern part of Stalingrad and tearing a few holes in the Soviet Northern defense line shouldn't win them the game. Secondly the game plays for a long time and is very hard to be finished in one sitting, which in my opinion wasn't what the Area Impulse system was intended for. (The inventor of the system only created the first two games: SoA and TaC.)

Another word on the expansion counter sheet. Even including the extra counters shouldn't take the game to NOT be resolved after three weeks, which is the same period of time the base game covers. Wasting more than $10 on a sheet of cardboard is therefore ridiculous.

Space Cadets: Away Missions
4.5
F Frohike
"This game is fantastic. It packs all of..."