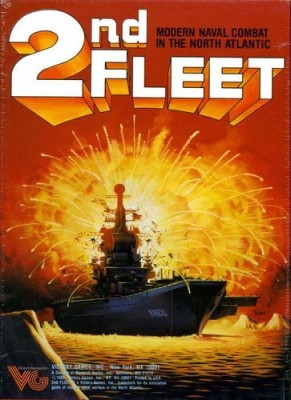 2nd Fleet is second in a series of naval combat wargames that present hypothetical Cold War battles in the 1980s.

In 2nd Fleet the Soviet Red Banner Northern Fleet clashes with the US Navy and it's NATO allies. Played with all of the rules this is a naval monstergame with nukes and specific fuel consumption, though beginner and intermediate scenarios are included and are fully playable. The backdrop of the Cold War really comes through in this challenging wargame.

Rating
5.0
Already have an account? Log in now or Create an account
One of My Favorites
August 15, 2008
Rating
5.0
This is probably one of my favorite Navy games out there. It's not so meaty that it gets bogged down in the details like other Navy games but there's enough there that it feels like a Navy game. I used to have this one when I was younger but it was part of the games purge when I went to college (my mom "accidentally" threw them away). I managed to score a copy on Ebay a couple years ago and was surprised to find that it still plays well. Played the monster scenario a couple times. Never played the logistics rules though.

I also have the rest of the series 6th, 5th and 3rd Fleets. All are very good and seem to add more stuff to the basic game.
M
mikoyan Top 50 Reviewer 7 reviews
Comments (0) | Was this review helpful to you? 1 0
Discuss this article
Log in to comment
Posts in discussion: 2nd Fleet