Battue: Storm of the Horse Lords 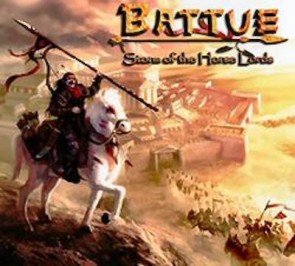 Battue: Storm of the Horse Lords is a fantasy boardgame where each player controls a barbarian horde, the hordes ride in to sack the city of Battue.

Each tile in the city represents a building to be sacked; temples, the palace, merchants, ect. Each tile is flipped as a horde moves to it and has a defensive value added to a die roll that is handled by the non-active player to the left. The horde rolls a die and adds the number of warriors in that horde. Event cards may change the outcome of the battle as well as having other effects. If the horde loses it is repulsed, if it wins it plants its flag for VP and takes loot cards that are either VP or advantageous game effects. A horde can try to steal an opponents holdings as well.

This game plays in around an hour with 4 players. It's not deep and it doesn't have a lot of the "tough decisions". A lot is left up to chance during play and on occasion fate can really screw you. For being a newer publisher Red Juggernaut has done a great job with the components, nice big, sturdy tiles and cards, lots of nice plastic barbarians on horseback. It is a fun fantasy boardgame, barbarians pillaging a city sounds like a damn cool theme to me and Battue is fairly thematic. This is a game for every Ameritrasher's collection.

Rating
3.0
Already have an account? Log in now or Create an account
Meh?
August 18, 2008
Rating
3.0
I thought it looked kinda neat when the game started, and it's definitely SUPER attractive, but I just felt like there needed to be something more involved here. Different unit types or something. Just kind of boring decisions to be made. By the end I just wanted it to be over and ended up suiciding myself out of a safe defensive position just to stop the boring humdrum.
S
Ska_baron Top 50 Reviewer 20 reviews
Comments (0) | Was this review helpful to you? 0 0
Discuss this article
Log in to comment
Posts in discussion: Battue: Storm of the Horse Lords