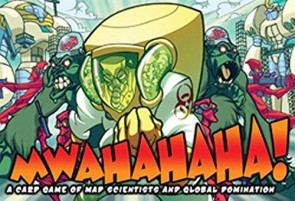 Mwahahaha! is a card game of Mad Scientists and Global Domination. You assume the role of an evil genius who builds a criminal empire and constructs a doomsday device with which to cow a trembling humanity. But you're not the only one with grand machinations. Other players rival you for absolute mastery. He who completes his device first and collects the highest ransom is declared the winner — and ruler of the world!

Rating
4.0
Already have an account? Log in now or Create an account
Earth will bow before my mecha-dino-zombie army!
November 21, 2008 (Updated: February 01, 2009)
Rating
4.0
Fun card game with a great theme and cool artwork. The rulebook is pretty long, but the rules are actually quite easy. Turns consist of you trying to get resources for your doomsday device and screwing over everyone else as much as possible. The green and purple dice are way cool (though a little hard to see on my green tablecloth). The theme and artwork was great and it was a lot of fun to threaten France with "bad weather... forever!" and just to be an evil mad scientist for about an hour.

If you like the theme at all, I highly recommend you try it.
A
Aarontu Top 50 Reviewer 25 reviews
Comments (0) | Was this review helpful to you? 0 0
Discuss this article
Log in to comment
Posts in discussion: Mwahahaha!