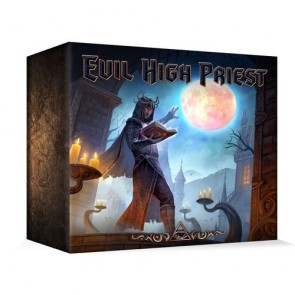 You are an ambitious priest in a sinister cult, but your Great Old One lies dormant, locked under the awful power of the dread Elder Signs. He depends on you to free him from this half-existence! You must break your insane henchmen out of the asylums where they are locked up, gather spellbooks and other resources, summon endish monsters, conduct dark rituals, and protect yourself against the forces of normal society. If you succeed, your Great Old One will reward you with the title of High Priest, second only to him in the coming cataclysm! But you have rivals, other (obviously inferior) priests in your cult, who seek to claim the prize that is rightfully yours! You must thwart them, while carrying out your plans. Only one can seize the precious title of High Priest – and it must be YOU!

Evil High Priest is a worker-placement game in which the players take the part of priests of a Lovecraftian entity. All players worship the same Great Old One, but they are emphatically not allies. When they awaken their Great Old One, he will decide which among them is the best (based on VPs) and appoint that priest, and that priest only, to be the High Priest, who wins.

The game is performed in Action phases. the players take turns moving their cultists to activate various sites on the different boards, gathering resources, summoning monsters, shattering Elder Signs, and launching investigator raids (which attack all players). When all players run out of cultists, the Action phase ends, and players recover their cultists, freeing up the board sites for the next Action phase. Victory is determined when the last Elder Sign blocking your Great Old One is shattered, and at this point everyone totes up points. Different resources are worth different amounts, but the most valuable are the Elder Signs.

Driving the game are the player's need to recruit more cultists & gather more resources, balanced against his need to shatter Elder Signs and protect himself against the deadly investigator raids. Unusual among worker placement games, the cult board can be swapped out between games, for a different experience. The Cthulhu cult board does not play the same as the Black Goat cult board, and they require different tactics and planning.

ChristopherMD wrote: So instead of a peon trying to best please a noble I can be a peon trying best to please Cthulhu. I'll pass.

This is the result of 18 years of dogma from BGG: euro-wanker game designers keep taking cool themes and settings and reducing them to boring procedural work.

cdennett replied the topic: #272099 27 Apr 2018 21:59
This is the design of Sandy "Cthulhu Wars" Petersen's son Lincoln (with help from Sandy, obviously), so I doubt it ever had a different theme. I think Lincoln was helping develop Sandy's games and wanted to take his shot at his own design. So this has far less to do with BGG inspiration, but rather Peteresen Games trying to find more viable products to grow or maintain the size of their company. With the recent failure of their Dungeon Boss board game Kickstarter and really any project other than Cthulhu Wars under-performing (relatively), I think they may be heading into troubled waters...

charlest replied the topic: #272239 30 Apr 2018 09:01
Gods War needs to be a big hit, I think. They certainly can't sustain themselves on Cthulhu Wars as it seems like the whole family is employed at the company.
Read More...