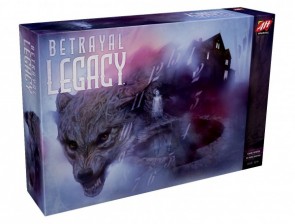 Betrayal Legacy takes the concept of the original betrayal game, exploring a haunted mansion, and adds permanent changes and a multi-game story arc that define the Legacy concept. At Pax Unplugged it was announced that the new game will feature a prologue and a thirteen-chapter story that will take place over multiple decades. Players will represent members of a specific family, with some characters aging within the story arc and possible family descendants making appearances.

Betrayal Legacy is a semi-cooperative campaign board game that tells an overarching story of the House on the Hill incorporating the actions and choices of the players. Over the course of the campaign, the game is permanently altered until players are left with a fully customizable, re-playable board game version of the critically-acclaimed Betrayal at House on the Hill. Betrayal Legacy is a stand-alone experience designed in partnership with Avalon Hill and award-winning legacy designer, Rob Daviau. Fans of the original Betrayal at House on the Hill will enjoy this fresh take on the classic game, however, no previous experience is necessary to play. Even players new to the brand can jump in, explore, and affect the spooky history of the legendary House on the Hill.

Betrayal Legacy marries the concept of Betrayal at House on the Hill — exploring a haunted mansion — with the permanency and multi-game storytelling exhibited by Daviau's Risk Legacy and other legacy games that followed. Betrayal Legacy consists of a prologue and a thirteen-chapter story that takes place over decades. Players represent families, with specific members of a family participating in one story, then perhaps an older version of those characters (assuming they lived) or their descendants showing up in later stories.

Why would people keep exploring a haunted mansion for decade after decade, especially when horrible things happen there? Curiosity, I suppose, or perhaps an ignorant boldness that comes from the belief that we know better than those who have come before. Look at all that we've learned, marvel at the tools we have at hand! Surely we'll all exit safely this time...

As with other Betrayal titles, the game is narratively-driven, with elements that record the history of your specific games. The tools mentioned earlier, for example, become attached to specific families. This isn't just a bucket; it's my bucket, the one my grandpappy used to feed his family's pigs when he was a boy, and while you can certainly use that bucket, I know how to wield it best from the time he spent teaching me how to slop. Yes, it's an heirloom bucket, and when kept in the family, I get a bonus for using it.

southernman replied the topic: #271875 26 Apr 2018 08:28
I hate that all these Legacy games came out as my AT-orientated gaming group drastically dropped in numbers and most other gamers in my town (that I've found) are predominantly euro gamers - well enough that I would not be able to even get a legacy game going for more than a few plays. I still have Risk Legacy bought 4-5 years ago and (optimistically) got Seafall on sale this year but the most people I am ever going to semi-regularly get to play them is three and I'm not going to waste it on that, I'll probably keep 'em for a few more years in hope then sell on to someone who can play them ... and after saying all that it is probably short odds that I buy this if it hits the UK at a decent price, and I'd like to temper what Matt said with I hope after a few goes at this Rob will have this Gen-3 version humming.

MattDP wrote: Really don't know what to make of this. Suspect it's either going to be absolutely brilliant or terrible.

If it's anything like the current Betrayal games, half of it will be brilliant while half of it is terrible.

The two games we have played so far have taken only about an hour each, including set up, and have swiftly gotten to the haunt without the sometimes overlong wandering around the house with no clear goals bit that the original has.

There is some kind of mystery that is being slowly revealed with little hints and clues, which makes you want to play the next scenario as soon as you have finished the last. But we are pacing ourselves, so we won't get to find out what gets revealed in the next chapter until next week.

There's also a little metagame developing among our players along the lines of:

"Why are you attacking me and not her?"
"Because you drowned my mother last game."

ubarose replied the topic: #298758 21 Jun 2019 15:51
If you wait a few more weeks, can give you an opinion after I've played a few more games. The first two games seem to be introductory/tutorial. At least I hope they are.

That's disappointing. I assumed that the first two scenarios were tutorials as they introduced all the basic rules of the game kind of piecemeal, and they were rather simple and inconsequential. I was expecting it to ramp up quickly now that all the rules have been introduced.

Josh Look replied the topic: #298773 22 Jun 2019 13:29
So far I’m enjoying much more than I thought I would. The introductory nature and slow introduction of mechanics doesn’t bother me because a) it’s just Betrayal At House on the Hill and b) it’s way better than most games of Betrayal At House on the Hill. I think it’s for the best (in my limited exposure to them) that Legacy games remain simple. More simple games means less room for error and less chance of doing irreparable damage to the experience.

I was squarely against the idea of Legacy games, and I still kind of am, but that first scenario really justified it.

drewcula replied the topic: #298830 25 Jun 2019 08:25
My group sped up their schedule, and we played last night.
For our last time.
After wrapping the fifth game, we unanimously agreed to stop the legacy.
There are dozens of other games we'd rather pursue, from either one-shot sessions or campaign play.
I can't contribute much without spoilers, and I don't want to be a wet blanket. As always, your 'mileage may vary.'

Personally, I'm bummed. I adore haunted houses across all media; books, movies, television, and amusement parks. Board games? I guess not. OG Betrayal is still a hit with the college freshmen at work, but I've grown distant on it. Great concept, mediocre execution. At the end of the day, Betrayal Legacy has fallen into the same pattern.

Jarvis replied the topic: #298835 25 Jun 2019 10:14
Yeah sounds if you soured on original Betrayal then you weren’t going to enjoy this. This is the best version of Betrayal, but at its heart it’s still Betrayal.

This has been my friends group game of the year so far. To the point where they’ve gotten their other friends to start up their own campaigns of it. We are all more casual gamers though.

I loved Betrayal Legacy myself. I played the full campaign and enjoyed the hell out of it. I realize it has flaws, but they weren’t big deals to me. We totally had meta gaming too with the heirloom items and what various families did you you in previous games too.

Thank you. I hope it turns out the same way for us. We do like original Betrayal, other than the crap shoot of sometimes getting a broken haunt. Seems like your group plays the same way we do, so it sounds like we have a good chance of this being great fun.

I’ve noticed overlap in the games you all play and what we like. I’ve gotten a bunch of good recs from it too.
Read More...