Kick Ass: The Board Game 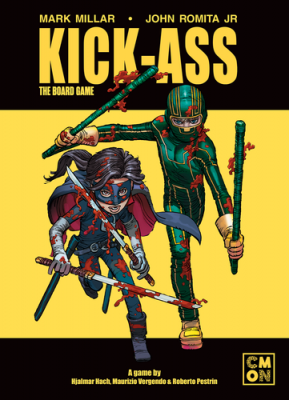 CMON has announced that Kick Ass: The Board Game will be released straight to retail, instead of the originally planned Kickstarter.

This superhero business can be tricky! Sometimes, even the best laid plans can be upended by a natural disaster, an evil villain’s plot, or even simple timing.

Players will be able to assume the roles of characters from the comic book series by Mark Millar and John Romita Jr. like Kick Ass, Hit Girl, and Big Daddy. They’ll battle to save New York City from a supervillain’s plot, while balancing the tricky business of their messy personal lives. Featuring brand new art inspired by its comic book origins, engaging game play, and highly detailed miniatures representing the characters from the stories, Kick Ass: The Board Game will inspire players to put on the mask and fight to save the city.

southernman replied the topic: #275479 15 Jun 2018 15:21
Not knowing anything about the comic (or the movie ?) does this have enough of a mainstream following to warrant a proper release ?

Shellhead replied the topic: #275481 15 Jun 2018 15:32
I read and enjoy a lot of comics, but Mark Millar is one of my all-time least favorite comic writers. He likes to write superhero comics, but he is apparently too much of a sociopath to understand heroism. So instead he writes about amoral assholes like Hitgirl or the Ultimate Avengers. I am giving this game a hard pass.

That said, if this game was coming out in 2011 or even 2013, I think it could have gotten a fair amount of mainstream interest due to the movie. But it is 2018, and the zeitgeist has moved on.

Shellhead wrote: That said, if this game was coming out in 2011 or even 2013, I think it could have gotten a fair amount of mainstream interest due to the movie. But it is 2018, and the zeitgeist has moved on.

Agreed. Not really my generation but I have a hard time believing there's a lot of nostalgia for Kick-Ass.

repoman replied the topic: #275614 17 Jun 2018 12:31
This game will soon be sitting next to other timely releases featuring an I P nobody cares about such as The Dark Crystal and X-files. That is to say on the discount table in the back of the shop.
Read More...