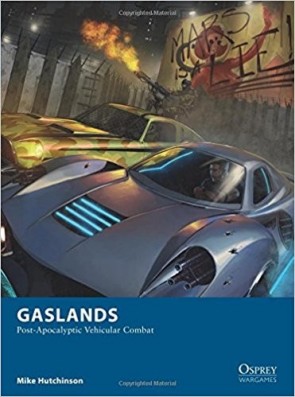 Shoot, ram, skid, and loot your way through the ruins of civilization with Gaslands, a tabletop wargame of car-on-car destruction in a post-apocalyptic wasteland. Players control small fleets of armed vehicles in battles for resources, dominance, and survival. With rules for multiple vehicle types (from motorbikes to big rigs), varied special weapons and accessories (including oil slicks, caltrops, and nitro boosters), and a host of options for scenarios, environmental conditions, crew, and campaigns, players can tailor games to match their own visions for an anarchic future

I think this game is pretty neat. Neat, despite me:
1) loathing games that use templates.
and
2) never having played it.

As an old Mad Max fanboy, I tried my best to dig Car Wars. That didn't work. I didn't have the teenage scratch to invest in Dark Future, choosing instead to buy into Blood Bowl. I did reclaim a bit of childhood nostalgia when I bought Thunder Road from eBay. Thanks eBay! Thunder Road scratches some Road Warrior itches, but not all.

So Gaslands arrives, and it's on my radar. Turns out, a lot of associates have fallen head over heels for it and they've invested serious hours. But their time investment is with the craft, more than the game. Seriously, they have scheduled "chop shop" nights at their club.

At arm's distance, I joined a few social media sites dedicated to the game. Just a lurker, not a poster. The creative output is fantastic. Converting $0.99 Matchbox and Hot Wheels vehicles into death machines is seemingly very fun. I find enjoyment just looking at the creations!

I attended Adepticon two weeks ago. Osprey publishing had twenty copies of Gaslands shipped in for the event. Apparently, they've had difficulty keeping it in stock. I thought there would be no harm in buying the $20 rulebook, so I bought it on Thursday. It was sold out Friday morning.

I've yet to play a game, but I'm excitedly building my toolbox of bits. Fun times ahead. I hope.

And good on the designer Mike Hutchinson. He's practically giving this game away, with a lot of components available online for free. Bits and bops? He has a third party program called "Friends of Gaslands." Your cottage industry can churn out Gaslands product and sell it as long as you pay Mike a $4 monthly subscription fee.

Are any F:ATties enjoying this game of post-apocalytpc vehicular combat?

hotseatgames replied the topic: #267112 08 Apr 2018 14:20
I have the rule book, I made my dice, and I made my templates. I also purchased 5 cars of various types. Another person in my group is going to bring a bunch of other cars. The plan is to play for the first time in 2 weeks. I am really looking forward to it and I hope it's a hit.

Brewmiester replied the topic: #267113 08 Apr 2018 15:46
We are supposed to play a game next Sunday. I've got templates and dice on order. It is pretty amazing seeing some of the stuff posted to the Facebook group.

Erik Twice replied the topic: #267114 08 Apr 2018 17:45
I'm very interested in this. I joined a club recently and was thinking of bringing Car Wars with me. How does it compare? Does it have actual strategic depth or is it more of a "for fun" thing? I was very impressed with how Car Wars worked (the CRT/turn key are amazing) but it had so much filler and junk I never got to play it for real.

I bought a lot of 50 Hot Wheels on Ebay for $30, 3D printed templates from a friend at cost, and I'm ready to rock. I dirtied up four cars and I'm working on some extra bits to add to them soon. I think we're playing our first game in about a week.

quozl replied the topic: #267147 09 Apr 2018 12:57
I've been look at car combat games lately. I found Gaslands, cut out some cardboard templates and gave it a try last weekend with my daughter. It's really smooth.

Gives the maneuverability of Car Wars but streamlines it all with the templates and hazard tokens. When you get too many hazard tokens, you wipeout. Combat is also streamlines, You don't have to track damage on every side of your car like in Car Wars. Just check off your hull points and when you get to zero, your car is a wreck.

It even has car creation rules, simplified again, so you don't have to calculate weight and space for every single item.

I like it a lot. I'm thinking about integrating it into my post-apoc RPG campaign I'll be starting up soon.

bfkiller replied the topic: #267232 10 Apr 2018 16:07
I'm trying this game on the 21st with minimal knowledge, other than it's like Mad Max and put together with modded hot wheels. I'll try and remember to put my thoughts in here after I give it a go.

There are also some companies that print weapons and sell them, You can find the particulars at the Gaslands forums.

I've not found any free 3d printing plans yet.

The Beer Olympics is happening on June 2nd this year. I'll put a thread up for it in case anyone is interested in participating.

Shellhead replied the topic: #267369 12 Apr 2018 11:06
As an old-school Car Wars fan, it looks like Gaslands falls short of what I want from this kind of game. I liked the level of detail in Car Wars, though it eventually collapsed under the weight of too many expansions and some power creep in the newer weapons. This game seems a little too focused on the toy factor and hand-wavy on the system, which will likely lead to arguments during close games. And while the modified Hot Wheels look cool, their size will paradoxically make for smaller map layouts and slower-moving vehicles during combat.

I seem to remember it taking about 2 hours and 80 phases for my Car Wars vehicle to move 12 inches.

I seem to remember it taking about 2 hours and 80 phases for my Car Wars vehicle to move 12 inches.

The vehicles could move faster in Car Wars because they had smaller tokens which meant potentially large maps. My favorite was the small town map from Sunday Drivers, which included a nice long main street.

But your point is good. The level of detail in Car Wars could bog the game down. My group played a huge amount of Car Wars in the '80s, so the turns went by fairly quickly unless there was a collision. One of our most ambitious duels used the Double Drum map, and each of our six players got $30,000 to spend on a pair of vehicles. Counting an hour of hasty vehicle design at the start of the session, the whole 12-vehicle fight took about 4 hours. 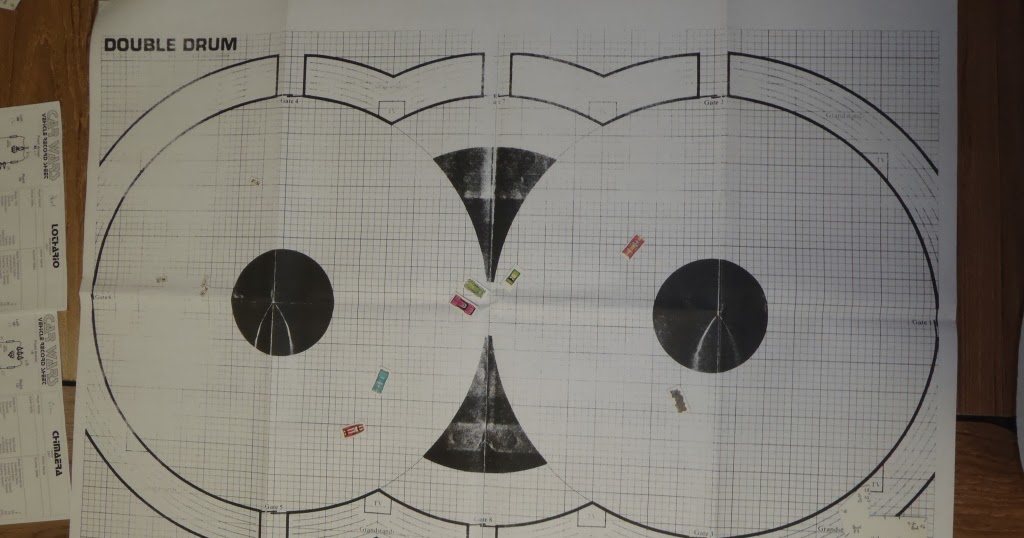 Shellhead wrote: As an old-school Car Wars fan, it looks like Gaslands falls short of what I want from this kind of game. I liked the level of detail in Car Wars, though it eventually collapsed under the weight of too many expansions and some power creep in the newer weapons. This game seems a little too focused on the toy factor and hand-wavy on the system, which will likely lead to arguments during close games. And while the modified Hot Wheels look cool, their size will paradoxically make for smaller map layouts and slower-moving vehicles during combat.

You can play at any scale you want. Just resize the templates. I'm not sure what you mean by hand-wavy on the system though. All arguments are settled by the rule of carnage: whatever results in the most damage is what happens.

Michael Barnes wrote: I wonder if there is anyone out there that still regards Car Wars as worth playing today.

No idea, but in my imagination, there are a couple of events at Origins and GenCon, with maybe a dozen old-timers.

Michael Barnes wrote: I wonder if there is anyone out there that still regards Car Wars as worth playing today.

I do, I'm just not interested enough to make my own player aids. I really think the core mechanics are compelling, it's just that the way they are presented is a chore. I think the game needs not so much a redesign as it needs to present its content much better. Micro Machines would help, too.

In other words, I would need to work to print the CRT, devise a good way to write down damage and track speed and all that is work.

Anyways, my worry with Gaslands is the way you collect hazard tokens. I understand why it was designed this way, but it seems odd that the risk of a manouver is impacted not so much but what you are doing, but what you did on other turns. It makes sense, from a game design perspective but I liked the simulationist way it is handled in Car Wars.