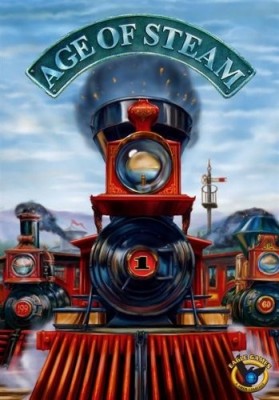 Age of Steam is Warfrog's first foray into railway games. It is developed from the well received Lancashire Railways, published by Winsome Games. The game combines the cube movement system from LR with a track tile placement system that gives you greater freedom over where you build your routes. The core of the game involves trying to move coloured cubes to destinations of the same colour, so red cubes want to move to red cities, blue cubes to blue cities, and so on. By moving a cube along your own track you increase your income level, (note that this is a permanent increase). You can also move goods along other players' track but that means they will gain the increase in income.

Rating
4.0
Already have an account? Log in now or Create an account
April 19, 2019
Rating
4.0
Steam is the better game and you know it.
L
Legomancer Top 10 Reviewer 158 reviews
Comments (0) | Was this review helpful to you? 0 0
Discuss this article
Log in to comment
Posts in discussion: Age of Steam