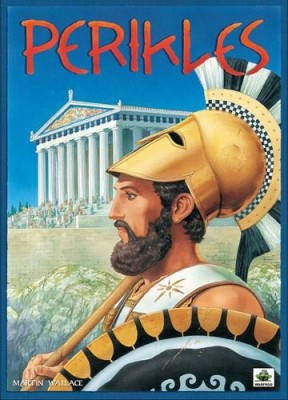 Together the Greek City States had defeated the greatest power in the world, the Persians. Now, though, pride and envy have led them to fight amongst themselves in what we know today as the Peloponnesian War.

Each player represents a powerful Greek family with political influence spread across the six major city states of ancient Greece. Players strive to become leaders of these cities, thus taking control of their military forces. With these forces players will aim to win glory on the battlefield.

5 stars
(1)
4 stars
(1)
3 stars
(1)
2 stars
(0)
1 star
(0)
Rating
4.0
Already have an account? Log in now or Create an account
Perikles
August 27, 2008
Rating
5.0
This is one of the trashiest Euro or most Euro Ameritrash games. Actually, this game has 2 parts. The first part is very Euro like / area control. The 2nd part of the game is very trashy with lots of dice rolling and table talk. Perikles is my 3rd favorite Wallace game behind AoS/RRT and Struggle of Empires. I decided it was trashy enough that I included it in Trashfest.
K
KingPut Top 100 Reviewer 5 reviews
Comments (0) | Was this review helpful to you? 0 0
A disjointed body of mechanics somehow gets you in
June 02, 2009
Rating
4.0
This is a great game for the odd numbered groups that pits different city-states from ancient Greece in a battle for dominion.

The thing with this game is that is has different phases that are hardly related to each other, but in order to win you have to realize the biggest city-state is the most vulnerable as well. It's also worth mentioning that in order for the different phases to work together you've got to think outside the box and find how to indirectly influence the next phase on your favor.

For the most part Martin Wallace's games are filled with mechanics and different parts that feel disjointed, but this is one of his games that manages to work better even when it doesn't make a lot of sense.
J
joseaguerof Top 50 Reviewer 19 reviews
Comments (0) | Was this review helpful to you? 0 0
Wallace trips in sight of Olympos
September 17, 2008
Rating
3.0
Martin Wallace does make good games, but sometime he overdoes one part, making it overly complex and slow. The battle engine in this game is seriously overdetailed. It doesn't add much to the game. So it disappoints as to what it could have been. I suggest you play Princes of the Renaissance, Struggle of Empires or Liberte instead.
J
jur Top 500 Reviewer 1 reviews
Comments (0) | Was this review helpful to you? 0 0
Discuss this article
Log in to comment
Posts in discussion: Perikles