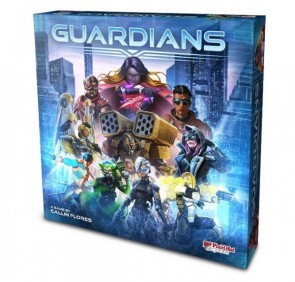 Set in a future world where the global government, known as InterGov, has called upon a new generation of super-powered heroes to keep the peace, Guardians is a card game that simulates battles between these heroes for control of unusual locations. Each player forms their own team of three heroes, drafted from the pool of available combatants. Each hero has their own “power” cards and “ultimate” cards, which form the player’s own custom deck, and finding effective combos between the powers of various heroes is a key component to the game’s strategy. These cards are then used to compete against the other players for control of various locations. Points are awarded for control of locations, with the first team to reach nine points claiming victory.