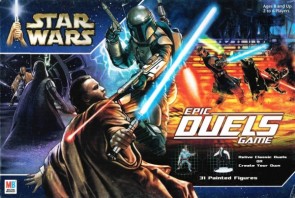 Star Wars: Epic Duels is a rules-light fast playing game of Star Wars combat. One player will take either a main character representing the forces of good with low-power trooper types (such as Obi-Wan with clone troopers) or one of the famous duos from the movies (such as Han and Chewie). The other player controls the Dark Side of the force, having a big main character with support (Vader and stormtroopers) or an evil pair of characters. Gameplay uses roll-and-move mechanics with other actions governed by card play. Cards can be simple attack and defense values or something more powerful such as Palpatine's force lightning or Han Solo's trick blaster shots.

This game is a lot of fun and several games can be played in one setting. It can get pretty furious, there's few things in gaming cooler than Darth Maul doing one whirling lightsaber attck after another. Easy to learn with the appeal of both of the Star Wars eras from the movies. Highly recommended.
Tweet

5 stars
(3)
4 stars
(0)
3 stars
(0)
2 stars
(0)
1 star
(0)
Rating
5.0
Already have an account? Log in now or Create an account
"If they should bar wars, let there be Star Wars"
August 21, 2008 (Updated: August 21, 2008)
Rating
5.0
Easy to learn, this game is loads of fight and fun. Beautiful painted pieces and a variety of boards to play on provide hours of entertainment. Interesting combinations of characters from the Star Wars universe in an endless battle to the death. Classic Ameritrash.
SI
Spanish Inquisition Top 50 Reviewer 11 reviews
Comments (0) | Was this review helpful to you? 0 0
The Force is Strong in This One
August 28, 2008
Rating
5.0
Star Wars: Epic Duels has very nice components and is really fun. It combines the best elements of a CCG and a small-unit tactics game, sacrificing only a little depth. We couldn't just play once, the four of us played this one all day long. Unfortunately, the owner of the game moved away soon after, and I haven't played since. It is a damn dirty shame that this excellent standalone game went out of print, to be replaced by another cynical, money-grabbing collectible miniatures game. I would rate this game a 6, except that I have to give it a -1 for having a Star Wars theme. I loved the first two movies, but everything since The Empire Strikes Back only inspires loathing.
S
Shellhead Top 50 Reviewer 24 reviews
Comments (0) | Was this review helpful to you? 0 0
Amazingly good
October 22, 2008
Rating
5.0
Epic Duels is a nice, light miniatures skirmish game, played on small Star-Wars themed maps.

You get 12 popular characters, each with their own supporter(s), and a deck to go with them. Each character has a different theme--the Emperor has discard and direct damage, Maul is all about blindingly quick attacks, and Luke and Leia have cards that directly feed off of each other.

For an originally $20 game, the bits are amazing with a nice stash of (badly) painted minis, the 12 decks of cards, two double-sided gameboards, character sheets for each team, and a some scorekeeping tokens.

Team play is great, or playing 1 on 1 two-handed. I'm not the biggest fan of straight one on one as it's too luck-based, but managing a team of two characters and their supporters is great fun. You can knock out a game in fifteen minutes with two, and you'll want to play again immediately after your last game.

I've never tried a massive six-player game but I'm betting it could get claustrophobic really quickly.

It's a great little game, if you can find a copy that doesn't cost you an arm and a leg, pick it up for sure.

KB
Ken B. Top 10 Reviewer 83 reviews
Comments (0) | Was this review helpful to you? 0 0
Discuss this article
Log in to comment
Posts in discussion: Star Wars: Epic Duels