Samurai Jack: Back to the Past 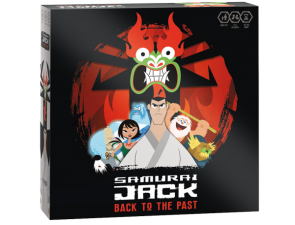 Accompany Samurai Jack on his quest to vanquish the Shape-shifting Master of Darkness, Aku. As beloved companions from Jack’s adventures, players strive to gain the most Honor by helping him gather Allies, Weapons, and Traits.

Based on the fifth and final installment of the series, Samurai Jack: Back to the Past picks up the title character's mission to return to the era before the reign of his adversary, the evil demon Aku. Jack's friends accompany him along a path, comprised of various locations from the series, to defeat villains and finish with the most Honor. Winning requires utilizing Allies, Traits, and Weapons while guarding Jack's Sanity, taking players on an unpredictable ride that mirrors the story-rich episodes revered by critics and loved by fans. Samurai Jack: Back to the Past will feature custom sculpted movers for Jack, Aku, Ashi, and more delivering an aesthetic quality highly coveted by collectors, hobby game enthusiasts, and admirers of the series' stylish animation.

repoman replied the topic: #278636 28 Jul 2018 12:03
Samurai Jack? Animated series by the great Tartakovsky? Had a 5th season released some 10 years after the show went off Cartoon Network? A season that is perhaps the greatest animated show ever made?


Now, somebody with an appreciation of that mind blowing 5 th season has created a game about it.


What the hell is not to get? This isn't some long dead IP. That 5 th season was recent.

* why even though they're always from fly-by-night or extremely casual publishers everyone yells "Shut Up and Take My Money!"

Legomancer wrote:
* why TWBG is filling its front page with this kind of reprinted press release

1. Because members here are interested in this information
2. Because press releases and new board game information drives 25% of our search traffic here. Users that land here on a search who don't bounce will then browse 3 - 7 additional pages.

Legomancer wrote: what I don't get:

Because they make money. Board game publishers aren't charities.

* why even though they're always from fly-by-night or extremely casual publishers everyone yells "Shut Up and Take My Money!"

"Everyone" doesn't yell that. The reviewers and hardcore hobbyists, we have some of both here, will be interested in just about everything. The rest of us wait to see what they say.

Barnes' Game of the Year Month is a Disney license from decades old animated movies. Not sure if he "fell for it" as its his job to review stuff.

How else would I know? I don't read BGG or visit every publisher website.

ubarose wrote: Did you get to play it, or was it just being displayed?

Sorry Uba didn't see your response until today. I did not get to play it unfortunately but got the quick blurb from one of their staff. It sounded like a nice co-op and the little figures were cool. Of course I really like Samurai Jack so that helps.

Also as to why this site has blurbs from other publishers like this--the site has been doing similar since its inception, a little late in the game to say, "hurh, dafuq?" about it now.
Read More...