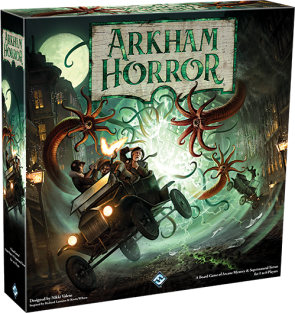 The year is 1926, and it is the height of the Roaring Twenties. Flappers dance till dawn in smoke-filled speakeasies, drinking alcohol supplied by rum runners and the mob. It’s a celebration to end all celebrations in the aftermath of the War to End All Wars.

Yet a dark shadow grows in the city of Arkham. Alien entities known as Ancient Ones lurk in the emptiness beyond space and time, writhing at the thresholds between worlds. Occult rituals must be stopped and alien creatures destroyed before the Ancient Ones make our world their ruined dominion.

Only a handful of investigators stand against the Arkham Horror. Will they prevail?

Arkham Horror Third Edition is a cooperative board game for one to six players who take on the role of investigators trying to rid the world of ancient beings known as Ancient Ones in the 1920’s. Based on the works of H.P Lovecraft, Players will have to gather clues, defeat terrifying monsters, and find tools and allies to stand any hope of defeating the ancient creatures that exist just beyond the veil of our reality.

Arkham Horror 3rd edition will be scenario based, and will come with 4 scenarios.

At the start of the game, the exact goals of your scenario are a mystery to investigators and players alike. As a scenario progresses, archive cards are added to a codex that sits above the board. Each of these cards advances the narrative and offers new objectives for the investigators to strive for, with victory eventually in sight. Finding clues may lead to favorable new archive cards, while the spread of doom may reveal cards that were best left unearthed. Ultimately, the choices that you make and the specific events of each scenario lead you down branching paths, encouraging you to explore the scenarios and determine the best way to achieve your unique goals!

It will have a modular board and will include 12 investigators, with "a customizable starting kit, letting you choose how you want to outfit your investigator."

I can’t believe people are asking for upgrade kits. Yeah,
There is one. It’s a $64.95 purchase.

I guess this is the secret project she couldn't tell anyone about.

Disgustipater replied the topic: #278949 01 Aug 2018 20:21
I'm not sure I like the way your objective is slowly revealed. I'm just thinking of Mansions of Madness 1st Edition and how it didn't really do much for me. Maybe they've figured out a better way since then.

I'll definitely want to try it out though.

Disgustipater wrote: I'm not sure I like the way your objective is slowly revealed. I'm just thinking of Mansions of Madness 1st Edition and how it didn't really do much for me. Maybe they've figured out a better way since then.

I'm thinking it sounds a bit like Arkham Horror the Card Game. You start off not knowing what's going on, but as you reach certain goals, and make different choices, more is revealed.

ChristopherMD replied the topic: #278955 01 Aug 2018 20:48
I can't wait to start reading what a shitpile game that Eldritch Horror is now that its not the latest thing.

Not a fan of scenarios vs 2nds sandboxy nature and prefer an old-fashioned board over tiles. Not looking for another FFG money-drain either right now. At best I'd say I'm cautiously optimistic about this. Will wait for some post-release reviews.

san il defanso replied the topic: #278957 01 Aug 2018 21:02
Normally I would be rolling my eyes, but Arkham Horror is for me the prime candidate for a new edition. I've played the second edition a lot until the rules procedure and the expansion content became more than I wanted to deal with. If the two options are to just let Eldritch Horror replace it or to keep it going, then a reboot is probably the way to go. The original game is just so over-complicated, regardless of whatever rose-colored glasses you wear. Definitely keeping an eye on this.

mads b. replied the topic: #278979 02 Aug 2018 03:16
One of the things Arkham Horror does right - especially compared to the arguably better game Eldritch Horror - is that it feels like a place. It's an actual town with people and locations, wonders and horrors. And all the side boards also have their own unique flavour. I'm not seeing how a modular board will allow for that same feeling of being grounded somewhere. I mean, part of being in a "real" place is that different locations tend to be the same place in relation to others.

But I'm definitely excited to find out more about it. The card game is really good, and while I love and adore Arkham Horror 2nd ed, I wouldn't mind a bit less bloat.

My custom 2nd edition box, made for me by my dad, almost guarantees I'm not going near this. I don't want that replaced.

ufe20 wrote: Not really digging the modular board. Doesn't make much sense thematically and just seems sort of shoehorned in there.

Agreed, the hexagonal modular puzzle piece boards are a turn-off.

I think that the hexagonal modular puzzle pieces are a great idea for some other game. Like Mads said, Arkham Horror did a great job of conveying the sense of a place. These puzzle pieces are completely at odds with any reasonable sense of an early 20th century town, but they would be ideal for a space station, or underwater installation, or a supervillain lair.

Michael Barnes wrote: I can’t believe people are asking for upgrade kits. Yeah,
There is one. It’s a $64.95 purchase.

I don't understand how anybody could look at these components and think that an upgrade kit would somehow bridge the significant differences between 2nd and 3rd editions. It would be like asking for an upgrade kit from the very modest 1st edition to 2nd. This is effectively going to be a brand new game that is going to recycle the FFG interpretation of Call of Cthulhu.

ChristopherMD replied the topic: #279010 02 Aug 2018 10:11
Some people think when they purchase a game they're entitled to lifetime support from the publisher. Its weird and kind of ridiculous. You agreed on purchase that you were only buying what's in the box unless it came with some certificate promising future upgrades. I don't like to use analogies, but in this case to me its like buying a 2018 car and then demanding to get the new transmission that was added to the 2019 version of that car. They just cry about stuff like this or Eclipse 2nd edition somehow making the previous games unplayable and that they're being ripped off by the publisher.

MattDP wrote: Lots of things to love, except for the Lovecraft. It's just so over-done.

I don't know if I've ever played anything that really, truly got the theme right. Setting, sure, a lot have been done well, but I'd argue that the Thing game or even Dark Moon did Lovecraft better. The idea of a hidden force out to assimilate you, total paranoia, trusting no-one...that's what makes Lovecraft, Lovecraft.

If Nikki put a traitor role in this, it may well be THE Lovecraft game.

Gary Sax replied the topic: #279013 02 Aug 2018 10:34
If it retains the wackiness of the original while making the narrative better linked together, I think it will have done its job. EH got the overarching narrative right but missed on the spontaneous, randomly generated, bizarre individual stories for each investigator that AH gets so right.

Gary Sax replied the topic: #279019 02 Aug 2018 11:30
Also, the modular part does make expansions a different proposition. My guess is that they're hoping to sell small district tile/story expansions a la AH LCG. Which I actually think is a good idea beyond the money pit?

Josh Look replied the topic: #279026 02 Aug 2018 12:28
For as over the theme as I am, my interest is seriously peaked. If its less of a thing where an RPG vomited into the box and more of a focused game, I am going to devour this. It looks like a complete departure from the previous edition, and Eldritch for that matter, and I am ready for it.

I’ve never understood the demand for “upgrade kits.” Maybe for games that have been out for all of a year and they seriously fucked something up, but publishers do not owe you a lifetime of support.

Josh Look wrote: I’ve never understood the demand for “upgrade kits.” Maybe for games that have been out for all of a year and they seriously fucked something up, but publishers do not owe you a lifetime of support.

Maybe blame D&D for the expectation of upgrade kits. When 3.0 came out, they were giving away free booklets that helped convert 1st/2nd edition stats to 3.0. And then when 3.5 became necessary to patch over all the issues that were found in 3.0, they offered another free upgrade book.

It seems to be saying less "prepare to enter a world of cosmic nightmares" and more "let's find out what wacky adventures those Arkham investigators are up to this week! <cue Duke's of Hazard theme>."

FFG used to be really good at enticing players with smart aesthetic choices regardless of the the contents of the actual games and I wonder if some of that has been lost.

Josh Look wrote: I’ve never understood the demand for “upgrade kits.” Maybe for games that have been out for all of a year and they seriously fucked something up, but publishers do not owe you a lifetime of support.

Maybe blame D&D for the expectation of upgrade kits. When 3.0 came out, they were giving away free booklets that helped convert 1st/2nd edition stats to 3.0. And then when 3.5 became necessary to patch over all the issues that were found in 3.0, they offered another free upgrade book.