Legend of The Five Rings: Battle for Rokugan 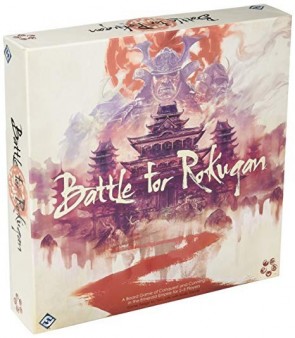 Rogan is a land filled with spirits, beauty, and strife. Seven great clans inhabit this diverse realm, ever loyal to the Emperor, but ever fighting for dominance among themselves. As they battle for supremacy, the daimyos who lead their people must use all their cunning and skill to gather information, anticipate their opponent's actions, and lay battle plans that will lead them to victory. Only one can prove themselves worthy enough to become the true voice of this land and usher Rogan into an age of prosperity.

Conquer the realm and bring honor to your clan in Battle for Rokugan! This turn-based strategy game of conquest and mayhem puts players in the role of Rokugan daimyo struggling for control over the rich land of the Emerald Empire. Leaders must balance their resources, plan their attacks, and outwit their enemies to ensure their clan's victory. The land is there for the taking. The most honorable daimyō will win the day!

Rating
4.5
Already have an account? Log in now or Create an account
Streamlined GoT in the L5R Setting
April 26, 2019
Rating
4.5
Battle for Rokugan takes place in the excellent Rokugan setting of the Legend of the Five Rings card game and rpg. Mechanically, Battle for Rokugan is a very streamlined and efficient version of FFG's Game of Thrones boardgame of the early '00s. Playable by 2-5 players in about one hour.

Each turn, players draw and take turns placing facedown tokens that represent armies, navies, ninja, raids, diplomacy, or even bluffs. There are some card effects and asymmetrical clan abilities that allow peeking at, manipulating or even removing tokens. Then all the tokens get resolved, potentially causing control of map sections to change every turn. After five turns, players count up map sections controlled, honor for each map section, and possibly secret objectives scored, and the highest total wins. The game functions well enough with two or three players, but really needs four or five to bring the game to full life. The clan and card abilities give just a bit of the Rokugan flavor, and the game is very accessible to players who are unfamiliar with Legend of the Five Rings.
S
Shellhead Top 50 Reviewer 24 reviews
Comments (0) | Was this review helpful to you? 0 0
Discuss this article
Log in to comment
Posts in discussion: Legend of The Five Rings: Battle for Rokugan