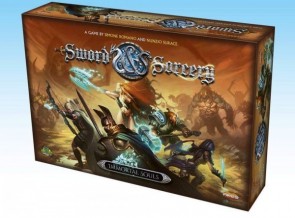 Five heroes awoke from the dead and were made immortal to save the kingdom from the rise of darkness. In Sword & Sorcery - Immortal Souls, up to five players control one or more of these legendary characters brought back to life by powerful sorcery, to fight against the forces of evil, controlled by the game itself.

Heroes grow stronger during their story-driven quests. Along the battles, they acquire soul points that regenerate their souls, restoring their legendary status with multiple powers, magic and soul weapons, and powerful artifacts. An innovative A.I. system allows the control and management of enemies by the players, giving them intelligent behavior and creating interesting battles every time, with no Game Master required.

There is no player elimination - when a hero dies, he becomes a ghost soul, an ethereal form able to use its unique ghost shout against enemies, and then he can resurrect spending Soul points at the Gods altar.

I've only played 2 sessions of the Sword & Sorcery prologue but my initial impression is guardedly favorable. If all goes well, this will be the "Descent 1st Edition Sans Overlord" game that I was seeking a few years ago, though I'm guessing that I'm in the minority here. I'm not sure many are still looking for this style of game in 2017? In the context of Gloomhaven, which effectively beat this game to the punch with zero miniatures & more content, I suspect that S&S won't make a huge splash and that's fine. I don't think there's much of a splash to be made in this corner of the genre any more.

I do, maybe perversely, enjoy the seemingly infinite recess of dice parsing in Sword & Sorcery, which I think will just cause some hair-pulling for others.

*Gremlin rolls two defense dice*... he blocks all but one hit.

There's lots of this, on every single turn. Add saving rolls, enemies that cause a round of defense rolls for the entire party because of AoE reactions, special powers to activate for further modifications, AI cards to verify for weapon-type resistances & other behaviors, cooldown timers to manage and... you get the idea.

The special sauce of this game is the Book of Secrets, which conceals scripted events and separates them from the main Scenario book used during setup. This adds a nice layer of surprise to compensate for the lack of exploration or branching in most of the dungeons that I've perused in the early sections of the campaign. However, while it adds to the immersion, the concealed script also guarantees a limited shelf life for the initial campaign. You can add variability by changing your party composition to keep things fresh (and each character has a lawful/chaotic ability tree, so you can try the "dark" side of a favorite), but the general flow of the scenarios will only be a surprise once.

The design also distinguishes itself with the AI, which is probably the best that I’ve seen in any dungeon crawler. Enemies hit & run, buff their groups, self-heal, heal others, stay at a distance & debuff heroes, prioritize targets beyond “uh, lowest HP smash!” And since the activation of enemies is randomized with a card draw after every hero turn, these behaviors can chain unpredictably. This soundly beats Gloomhaven in this regard, keeping you on your toes for the entirety of the skirmish.

Overall, I think the design succeeds in its goal of creating a very strong entry in this subgenre of quasi-scripted, campaign-only, dice-chucker dungeon crawls, while also demonstrating that perhaps it's time to stop chipping away at this design space. They've really mined it clean with this one.

Eh, who am I kidding. We'll keep mining it forever!

I've jumped back into this a year and a half later and... while the rules resisted a quick re-absorption as I was trying to "skim" them and just get playing (hah!), I did greatly enjoy the payoff once the scenario was underway.

The Descent 1st ed flavor still sits really well with me. I've come to enjoy this slower, more methodical & tactical approach to dungeon crawling that avoids the Scylla & Charybdis of "shallow tactical race" on one side (Zombicide, Massive Darkness) and "Card Management: The RPG" on the other (Gloomhaven, Mage Knight).

The payoff lies in the deep tactical options and versatility that this style of game provides without Euro-gamifying the skill/ability selection layer and neutering the delightful, controlled chaos of polyhedral dice. I don't want my skill & equipment dashboard to be turned into a San Juan minigame, or my dice to be transformed into deckbuilding tedium, but I also don't want everything to devolve into "chuck some D6's and hit on 5-6 or get punched in the groin!" (Zombicide, Darklight, etc).

This design knows the sweet spot that some dungeon crawler veterans have been craving and stays there. It doesn't compromise in the face of some potential "fiddliness" and slowness, because newsflash: some of us think that this might be where the interesting shit in this genre resides. Not in the perpetually generic fantasy story that so many try to make engaging & interesting. Not in blitzing through speed bump enemies to hit a switch across a map before the timer runs out.

Want less upkeep? Play an RPG and don't DM. Don't want to DM but would still like to deliberate the rich set of tactical options you would normally have in RPG combat? Play this.

However, I’ve gotta say, while I have some tolerance for corniness, the writing did absolutely no favors to this game after several quests. It reads like someone struggled to meet a deadline, started a Rise of the Runelords ripoff story, then realized they were still out of ideas for dialog and started flailing with Hollywood parodies like some 12 year old composing actively bad fan fiction because they figure, hey, this is due tomorrow so might as well make it funny! With a name like Sword & Sorcery, there’s generally zero awareness of genre, & it feels more like World of Warcraft. This would be mostly fine (crawlers are almost all in this vein) if not for the additional pop culture references & discordant material like Tomb Raider, Pirates of the Carribean, & old school Warcraft (like "Lok'Tar!" jokes, y'all). It doesn’t ruin the game for me, but the eye rolling alone brings this down half a peg.

Downgraded to 3
F
Frohike Top 50 Reviewer 7 reviews
Comments (1) | Was this review helpful to you? 1 0
Discuss this article
Log in to comment
Posts in discussion: Sword & Sorcery: Immortal Souls