The Rise and Fall of Anvalor 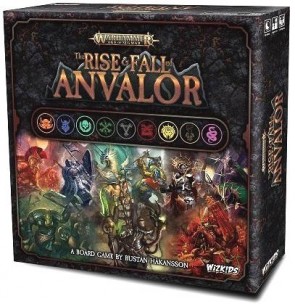 In the region of Aqshy, even if your uneasy allies place their resources in the perfect place, your mutual enemies can be strong and unpredictable. You'll build resources to block your allies from developing their strongest options, and they'll return the favor. They'll weaken enemies and you'll try to deliver the killing blow. Each turn will provide many choices, so you'll get to pivot as you learn the strategies best suited to your common enemy as well as your allies. One thing's for certain - whether Anvalor survives the siege on it or not, things are sure to get heated!

Get ready for a new kind of Warhammer Age of Sigmar excitement. In The Rise & Fall of Anvalor your official task is to help build and defend Anvalor together with the other Factions. However, your real goal is to gather the most Influence and secure dominance over Anvalor, even if it might ultimately cause the fall of the city. Gather the most Influence for your Faction by building City Buildings and defeating enemies during vicious assaults. At the end of the game, the player who has the most Influence over the city reigns supreme, and secures their dominance over The Great Parch!

With over 180 tiles in total, 9 different factions (6 player factions, 3 enemy factions), and 4 play variants (beyond the standard game) there's an enormous amount of game play content!

Isn't the idea that some of us pretty much just tolerate this setting in order to access the great components? Doesn't Wizkids just cut their components off of cereal boxes?

Josh Look replied the topic: #284827 27 Oct 2018 09:35
Shit, I was really hoping to get i here to make a snarky comment about someone making the predictable “Wizkids components suck!” statement. Damn, damn, damn!

Really, they’ve been better for awhile now. They’ve come a long way from the Gotham City Stratgey Game (which Michael said had the same Batman art you can find on birthday party goods at Party City) and Star Trek: Fleet Captains (which really did have the worst quality components for a $100 game). Hell, even the newer Attack Wing stuff looks better. I’ve picked up a number of their games over the last 3 years or so and I’ve had no complaints. Really, we can leave it alone and move on now.

GorillaGrody replied the topic: #284829 27 Oct 2018 09:45
I don't know. The most recent DDAS components were megaballs. I think the miniatures were just a pack of Flinstones vitamins.

GorillaGrody wrote: I don't know. The most recent DDAS components were megaballs. I think the miniatures were just a pack of Flinstones vitamins.

I haven’t touched a DDAS game in ages, aren’t they just the minis they’ve been using for the RPG? That’s how it was with the game’s released in the 4E era. If they’re new minis, I think GF9 is making them.

Josh Look replied the topic: #284832 27 Oct 2018 09:52
Also, I’m going off of Star Trek Frontiers, it’s expansion, Sidereal Confluence, Wartime, probably a few more I’m forgetting. Everything there is on par with most games from other publishers.

But this is a strange marriage GW has formed.

Josh Look wrote: Also, I’m going off of Star Trek Frontiers, it’s expansion, Sidereal Confluence, Wartime, probably a few more I’m forgetting. Everything there is on par with most games from other publishers.

Maybe I've got the DDAS publishers mixed up. I've owned Frontiers and Sidereal Confluence, and I'me not sure I've vouch for the components in those, either.

I think we can agree that the games are good, though? This Sigmar thing is a wait and see for me.

hotseatgames replied the topic: #284845 27 Oct 2018 13:10
I think, despite some printing errors, the actual component quality of SEAL Team Flix is pretty great, considering the difficulty of the task. Wizkids can falter, but in general they can produce components of good quality.

Hope this is cool.
Read More...