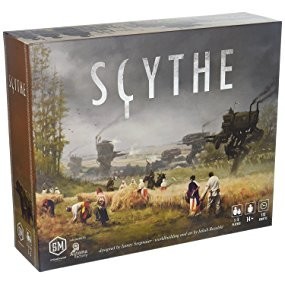 A time of farming and war, broken hearts and rusted gears, innovation and valor.

It is a time of unrest in 1920S Europa. The ashes from the first great war still darken the snow. The capitalistic city-state known simply as "the factory," which fueled the war with heavily armored Mechs, has closed its doors, drawing the attention of several nearby countries. Scythe is a board game set in an alternate-history 1920S period. It is a time of farming and war, broken hearts and rusted gears, innovation and Valor. In Scythe, each player represents a fallen leader attempting to restore their honor and lead their faction to power in Eastern Europa. Players conquer territory, enlist new recruits, reap resources, gain villagers, build structures, and activate monstrous Mech.

Other than each player’s individual hidden objective cards, the only elements of luck are encounter cards that players will draw as they interact with the citizens of newly explored lands and combat cards that give you a temporary boost in combat. Combat is also driven by choices, not luck or randomness.

Every part of Scythe has an aspect of engine-building to it. There is no player elimination, nor can units be killed or destroyed.

January 30, 2019
Rating
5.0
MB
Michael Barnes Top 10 Reviewer 137 reviews
Comments (0) |
April 22, 2019
Rating
3.5
Everything in this design works so well with the rest of the design that it's easy to forget that none of it seems to serve very well in service of anything else. The "achievement" style of victory is well executed, though it doesn't really give a feeling of stakes for some things that really need them, like the combat. Still, it's a rich strategic game, and one that has proven enduring in a flash-in-the-pan era of the hobby. Definitely worth checking out.
SI
san il defanso Top 50 Reviewer 55 reviews
Comments (0) |