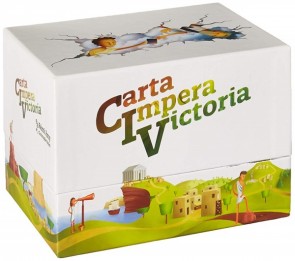 Carta Impera Victoria is a game of CIVilization and diplomacy in which you develop your own nation. Be the first to reach hegemony in one domain to make history, but keep an eye on your opponents. Forming a temporary alliance might be the best way to prevent a player from triumphing... and remember that offense is sometimes the best defense!

A game of CIV pits 2-4 players against each other as they build up their budding civilization through three ages, one card at a time. The cards are spread through six different domains: Military, Religion, Economy, Science, Culture, and Utopia. As players accumulate more cards in each domain, abilities will become available for them enact during their turns. The game ends when one player has the required number of cards for hegemony in a single domain, or the age deck runs out. If the latter occurs, the player with the largest number of majorities among the six domains wins the game!

Rating
2.0
Already have an account? Log in now or Create an account
April 19, 2019 (Updated: April 29, 2019)
Rating
2.0
A card-playing, hand-management game with a very thin civ theme. It's not bad, but nor does it stand out. Feels like it could use some kind of small jolt to make it more of a contender.
L
Legomancer Top 10 Reviewer 158 reviews
Comments (0) | Was this review helpful to you? 0 0
Discuss this article
Log in to comment
Posts in discussion: Carta Imperia Victoria

RoboRally
4.0
M metalface13
"Roborally is a great Ameritrash intro game. A lot of..."