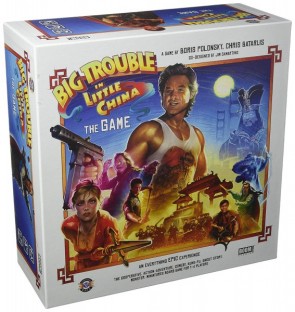 There is a secret world where ancient evil weaves a modern mystery? they call it Little China. It?s where Big Trouble was waiting for Jack Burton and his friends as they uncover an ancient diabolical plot. The evil minions of the immortal ghost-sorcerer Lo Pan are waiting to chop down the players with axes and guns in dark alleys and all throughout the battle-torn streets of Chinatown. Now, Jack, Wang, Gracie, and the rest of the gang must muster up all of their courage, survive against hordes of baddies, and then face off in a showdown with the darkest demon of them all Lo Pan!

In Big Trouble in Little China the Game you'll embark on a wild adventure to experience the exotic and mystical underworld of Chinatown. You and up to 3 other players (1-6 in Deluxe) take on the roles of their favorite iconic heroes from the film like Jack, Gracie, Egg, and the rest of the gang.

Each character uses their unique talents and abilities to take on various missions throughout Little China. You'll work together gaining chi and audacity to level up in preparation for the Final Showdown to take down Lo Pan, the Three Storms, and a slew of other powerful henchmen, in this cooperative, replayable, cinematic experience.

Cleopatra and the Society of Architects
3.5
H HiveGod
"A mish-mash of mechanics (set collection cardplay, blind bidding, and..."