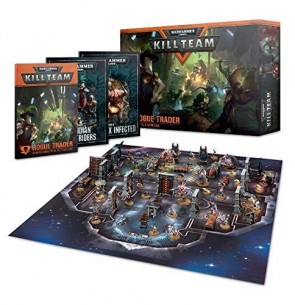 Rogue Trader Elucia Vhane and her Starstriders seek to colonise new worlds at the behest of the Imperium's mightiest leader. Their quest aims to travel far beyond the Chaos contamination that threatens to engulf Mankind. Yet nowhere is safe, for the twisted tendrils of corruption have followed them even beyond the borders of the Imperium. Can the Rogue Trader and the deadly specialists she has forged into a team defeat the hulking Vulgar Thrice-Cursed and his virulent band of mutated followers? Can the cutting edge of human skill match the loathsome gifts granted by the Dark Gods?

Kill Team: Rogue Trader is an expansion for Warhammer 40,000: Kill Team, the fast-paced tabletop miniatures game pitting small bands of elite specialists against each other in vicious skirmish combat. This set adds 2 new factions, new environments, new missions and a host of new rules, allowing you to recreate desperate battles beyond the borders of known space.

Inside the packed box: Kill Team: Rogue Trader A 56-page book filled with background and rules for the Elucidian Starstriders and Gellerpox Infected - as well as new advanced rules for all Kill Team factions.

The Rogue Trader book contains: Background To Roam the Void: an introduction to the Rogue Traders - warriors, explorers, leaders and merchants who bear a sacred Warrant of Trade, allowing them to engage in both commerce and war beyond the boundaries of the Imperium; A Growing Sickness: the insidious threat of Chaos grows stronger

Rogue Trader is an expansion for Warhammer 40,000: Kill Team, and requires a copy of the Core Rules. These can be found separately either as a standalone softback book, or as part of the feature-packed Kill Team boxed set

Cleopatra and the Society of Architects
2.0
SI Spanish Inquisition
"This game was cool the first time. I love..."