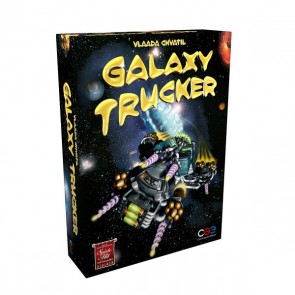 In a galaxy far, far away... they need sewer systems, too. Corporation Incorporated builds them. Everyone knows their drivers -- the brave men and women who fear no danger and would, if the pay was good enough, even fly through Hell.

Now you can join them. You will gain access to prefabricated spaceship components cleverly made from sewer pipes. Can you build a space ship durable enough to weather storms of meteors? Armed enough to defend against pirates? Big enough to carry a large crew and valuable cargo? Fast enough to get there first?

Of course you can. Become a Galaxy Trucker. It's loads of fun.

April 19, 2019
Rating
4.5
A great game that illustrates everything that is good about Vlaada Chavatil's outside the box design sensibilities. A classic for veterans and also an easy teach to new or inexperienced players.
GS
Gary Sax Top 10 Reviewer 101 reviews
Comments (0) |

5 stars
(2)
4 stars
(3)
3 stars
(0)
2 stars
(1)
1 star
(0)
Rating
3.8
Already have an account? Log in now or Create an account
View all reviews
No Economic System Supports What This Simulates
August 20, 2019 (Updated: August 20, 2019)
Rating
3.5
Man, what a letdown. This looked great, and I feel as if I should love it, but it really felt flat to me. I'm not sure what it's missing—it just came out as a mechanical exercise instead of the nail-biting, fate-hanging-on-the-turn-of-a-card experience it promised.

Perhaps I just need to relax and get into it more, but the cartoony art provides a speedbump I just can't clear. Maybe... maybe if we had a more intuitive grasp of the rules so the game flows instead of clumps. Nice idea, but that would require more plays, and this one's slipped far, far down the list.

UPDATE: So we're playing and I'm bumping along the bottom and we make it to stage III and then I get a work call that forces me to step away from the table for a bit... Upon returning I find out I won.

1. Don't let the engineer in your group endlessly noodle with the iPad app—he will build perfect ships no matter what tactics are employed against him, like "bogart all cannons" or the classic "sand timer cartwheel". And then he'll double all your scores. Forever.

2. It takes a certain kind of emotional fortitude to not weep openly when you finally finagle things to punch it to the front of the pack and run down the four-dollar pirate, putting salvo after salvo of beam weapons through his papier-mâché flying saucer, and then you're not even buzzed from your first celebratory Zgwortz when you warp around a neutron star and straight into the teeth of Voidbeard the Pirate with his nonstop fusillades that peel your battery nacelles, fountain crew into the silent black, and pick your guns and engines off one after the other and so on until you're just screaming for it all to stop stop STOP! And then the iPad-practiced engineer comes in and mops him up for the 12-dollar bounty. There are words to describe that sensation, but they carry far more meaning when screamed inside an isolating helmet rather than read off a dumb screen.

NOTE 1: Normally I hate it when people use the generic term "dollar" for all intermediary economic exchange units in games when there are already perfectly appropriate game-specific designators like "ducats" or "galacticreds" or "orphan femurs", but it turns out that "four-dollar pirate" is funnier than the thematic alternative.

NOTE 2: Voidbeard the Pirate, so-called due to his hideous predilection for weaving curdled space-time into his beard to strike terror into the hearts of his victims. And man, does it ever.
H
HiveGod Top 50 Reviewer 54 reviews
Comments (0) | Was this review helpful to you? 2 0
"R2 says that the chances of survival are 725 to 1
September 02, 2008 (Updated: September 02, 2008)
Rating
5.0
Very cool and fun puzzle-ish game where you have to build your space ship, and then go out and try to make money while not getting blasted to pieces. It has cool little space dude pieces, nice looking cards, and a cool theme. It's great fun going out and exploring deep space, finding planets with goods on them or possibly pirates that will attack you and destroy sections of your ship. You have to try to take home the most valuable cargo while fighting off pirates, slavers, and asteroids, and get back before the other players. Watching your hastily constructed ship be ripped in half by an asteroid is pretty cool and exciting for some reason.
A
Aarontu Top 50 Reviewer 25 reviews
Comments (0) | Was this review helpful to you? 0 0
Best euro (?) of 2007
September 02, 2008
Rating
5.0
This is a simple, innovative and fun game. Definitely the best game of last year's Essen (barring Napoleon's Triumph maybe) and at least in my eyes this should have won the "Spiel des Jahres" award since it fits all its criteria. Must have been the SdJ jury's bias towards German games, or maybe their bias towards boredom as was displayed in the 2007 nominations. Who knows ...

I don't want to drop many words on the game play, since everyone should experience this for themselves. I hope North America will have this game easily available soon. Have fun!