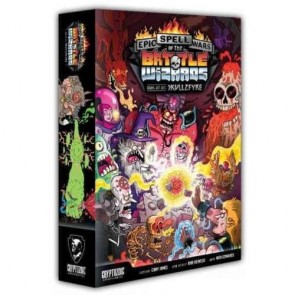 Hilarious spell-combining mechanic creates endless gameplay variation and invites players to explore hundreds of different winning combos. Do you have what it takes to be a BATTLE WIZARD?

Did you know that magical wizards are battling to the death . and beyond . right now!?

"What have I got to prove, magic man?"

Only who's the most awesomely powerful battle wizard in the entire realm, that's what!

As a Battle Wizard, you'll put together up to three spell components to craft millions of spell combos. Your spells might kick ass, or they could totally blow -- it's up to you to master the magic. You will unleash massive damage on the faces of your wizard rivals in a no-holds-barred, all-out burn-down to be the last Battle Wizard standing.

Do you have what it takes to use epic spells in a war at Mt. Skullzfyre? Will YOU be the Ultimate Battle Wizard!?! - Combine spell cards into three-piece combos, creating hundreds of unique and devastating attacks. The chaos is limited only by your thirst for destruction!

- Super mind-blowing fun for 2-6 wizards! - Dozens of Arcane Artifacts modify your spells and bring the ultimate pain to your wizard opponents! - Dead Wizard card innovation keeps players in the game, even when they suck and die before winning! - Simple to learn with endless replayability -- you'll be locked in deadly Wizard Combat till you've got a long, gross, goat-like beard! - Amazing art with over 100 unique images, the world of epic spell battles comes to righteously hilarious life! - Seriously, I'm not messing around, it's righteously hilarious.