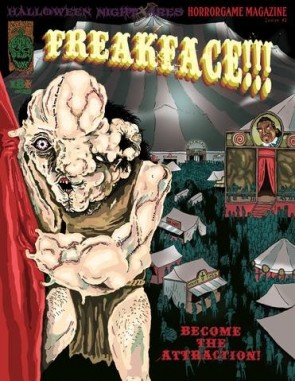 Game Name
Freakface
Publisher
Emperors of Eternal Evil/Blast City
Designer
Nate Hayden
Genre
Emperors of Eternal Evil/Blast City
“Lucian the Powerful’s Tremendous Tent of Monstrosities” nestled in a small Florida town in October of 1963, soon after came the disappearances. Where was Clay? Or Barry the kind Feed Store worker? Or even the old woman down the street? They all seemed to vanish when that damned tent was put up. Vaughn and Lucinda believe the answers might be within the Tent of Monstrosities itself. Late at night, clipping the fence, the two venture inside. The true story of what happened on this blood-drenched evening comes alive in the pages and gameplay of Halloween Nightmares Horrorgame Magazine.

Note: FREAKFACE!!! is the second game featured in our "Halloween Nightmares Horrorgame Magazine", a game magazine dedicated to Halloween and the Horrorgame genre. Players will need to xerox elements and provide two D6 and pencils to play this game

“Come see our splendid cornucopia of Strange Men & Women from far and distant lands! Gathered from deep Jungles, Mountain tops, ancient lost villages and even the bottom of the sea! Or Ride our fantastic carnival carts and view the strange bewildering dioramas collected from the lore and facts found on our journeys!”

FREAKFACE!!! is a tactical hex and counter game with each token representing an individual character. Characters have sheets with some individual stats related to speed, strength and will to live. The teens can win if any one of them can escape the North, West or East side of the map while hidden.


FREAKFACE!!! is a very visceral experience and we have rated it X. Anyone one under the age of 18 is NOT permitted to play. Pregnant or players with a fragile or nervous disposition are strongly encouraged NOT TO PLAY THIS GAME!