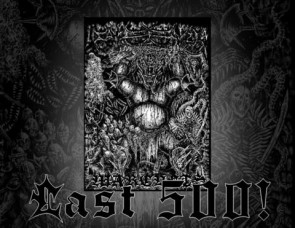 I awoke among my species, mine folk. I have risen, understood, grasped and taken my power, those below my slaves! I shall raise great armies to massacre any enemy! These territories are mine, only the weak to destroy! Shadow deities pretend to stand above me, but I shalt not kneel. I shall sit on any throne!

Cave Evil: Warcults is a stand alone game. Players who own Cave Evil can expand their game with Warcults. It can be played either as an individual game or as an expansion.

Players who own Cave Evil have the liberty to play as only a Warlord, only a Necromancer or both.
Players who own Warcults will begin as a Warlord, but they will be able to connect each future Corroded Corridor to this issue.

GAMEPLAY
As we learned in CAVE EVIL, a Necromancer can weave a web of control over 6 Squads, but their power does not end there. While they may dominate 6 squads, others may swear their allegiance to the infernal magi. The cave is endless. Battles for territory will forever ensue. The forbidden wizards must raise troops from their species, create Warriors from the weak and shoddy, inspire Command and demand the allegiance of their greatest Warlord. The warrior path begins!

Warcults is an introduction to a Warrior Path - the first expansion for CAVE EVIL.

A Warrior path is a way to play Cave Evil. It is a modified Sequence of Play to accommodate players that prefer to play with just a Warlord Character or with both a Warlord and a Necromancer.

The Warlord is a branch of Necro command and is under the allegiance of a Necromancer. The Necromancer is NOT needed to play!

A Warlord commands an army and the divisions of command below them.
Apart from WARCULTS features, the game introduces new actions and adjustments to the overall Sequence of Play.

Victory is dependent on each scenario.