Agents of Mayhem: Pride of Babylon 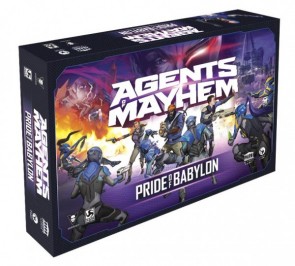 The world has fallen under the rule of LEGION, a supervillainous cabal of criminal masterminds. Doctor Babylon, LEGION's head of technology and development, has unlocked the secrets of the cosmic power source Dark Matter and plans global armageddon. In the wake of LEGION's ascendance, a crack-shot team of hand-picked agents known as MAYHEM emerges, whose sole purpose is to destroy LEGION and take the world back. Will you use LEGION's Dark Matter-powered doomsday devices and super-weapons to wreak havoc on Seoul: The City of Tomorrow or will you join the band of gadget-wielding misfits to dish out some MAYHEM?

Agents of Mayhem - Pride of Babylon is a team vs. team skirmish boardgame for 2 to 4 players. The game is played on a modular 3D board that is fully destructible. You and your opponents will play through a radiant story where every choice you make will have effects that ripple throughout the campaign. Play as either LEGION, an organization of super villains who have taken over the world, or as MAYHEM, a band of anti-heroes who will do what ever it takes to stop LEGION.Pride of Babylon is a story-driven 3D tactical boardgame based on the newest video game in the Saint's Row universe - Agents of Mayhem.

Uba could you recheck that please?


Shouldn't have to make Uba check this

ubarose replied the topic: #292053 11 Feb 2019 01:14
I understand. I thought I had misread the announcement myself. I actually checked, and rechecked before publishing the article. It seems to be quite a departure for Academy Games.

This is weird. I don’t know if it is a good sign or not — I don’t think there recent games that have been Kickstarted are nearly as good as their earlier games.

I saw the smiley, and knew you were just kidding around. I think Sag probably was as well. I think we are all just expressing surprise.

The game was designed by Gunther, the younger Eickert, so maybe he is looking to take the company into new territory. We might have to get Uwe in here for a little interview.

hotseatgames replied the topic: #292063 11 Feb 2019 08:10
I should introduce myself to those guys at Origins. They are only about 45 minutes from my house. I've never played one of their games before.

charlest replied the topic: #292064 11 Feb 2019 08:41
I remember being shocked by this when it went up on Kickstarter. It struggled a bit for them as well and they needed to rework some things to fund. The 3D aspect is appealing and I may check this out.
Read More...

Cockroach Poker
4.0
G Gregarius
"A deck of cards with unique artwork of creepy-crawlies and..."