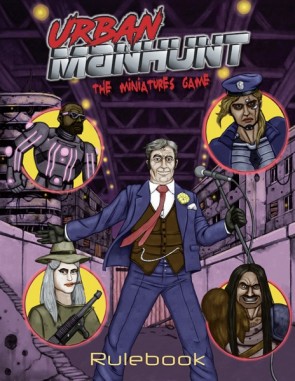 Game Name
Urban Manhunt: the Miniatures Game
Publisher
Spectrum Games
Designer
Cynthia Celeste Miller
Year Published
2019
Genre
Spectrum Games
Urban Manhunt is a tabletop miniatures game that depicts a harsh, violent sport of the dark near-future as seen through the lens of 1987. Each player takes on the role of a hunter, a highly trained and larger-than-life mercenary who scours sectioned off parts of prison cities known as zones, eliminating convicts (called crims) for points. The hunter with the most points accumulated when the time limit expires wins the match.

The Features of Urban Manhunt

• No Hunter-vs-Hunter Combat: While you are competing against the other players’ hunters, your hunter may not directly attack another hunter. That is strictly against the sport’s rules. This creates a completely different dynamic than other games of this nature.

• Crim Control: The game system itself controls the actions of the crims each turn, primarily through the implementation of Control Cards and Demeanors.

• Events:  Urban Manhunt utilizes a deck of cards called the Event Deck. Event Cards represent the myriad of interesting twists, developments and occurrences that can affect the match in some way. Maybe a sudden downpour puts a damper on the proceedings or a building is found to have an infestation of mutated, razor-fanged rats. Perhaps a mostly-ruined building collapses or the hunter has the opportunity to use their surroundings to inflict a truly stunning elimination.

• Create Your Own Hunter: You can select one of the pre-generated hunters (we refer to them as iconic hunters) provided in this book or you can create your own hunter, allowing you to match your stats to whatever miniature you’d like to use. The system for doing so is simple to use, yet can accommodate just about any hunter concept imaginable.

• Cost Effectiveness: We firmly believe you shouldn’t have to invest a lot of money just to engage in miniatures gaming. For this reason, Urban Manhunt can be indulged in without breaking your bank. The rulebook interior pages are black and white in order to keep costs down and each player only needs one miniature. The crims are represented by printable cardboard stand-ups.

Galaxy Trucker
3.5
H HiveGod
"Man, what a letdown. This looked great, and I feel..."