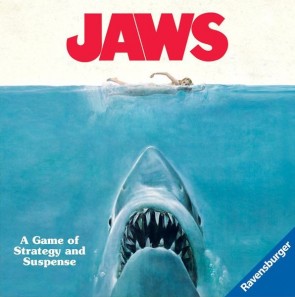 In Jaws the board game one player controls the shark, while up to three other opponents—playing as Qunint, Brody, and Hooper—try to cooperatively find the shark and kill it.

Jaws is played in two Phases.

In the Amity Island phase, the shark menaces swimmers and avoids capture. Other players attempt to pinpoint the shark's location and save swimmers from shark attacks.

In the Orca phase, played on the reverse side of the game board, Brody, Hooper and Quint are aboard the sinking ship engaging in a climactic battle against the shark, while using additional action and strategy cards to defend the Orca from targeted shark attacks.

If humans kill the shark, they win; if the shark attack on the Orca succeeds, the great white shark wins.

Shapeshifter replied the topic: #293033 26 Feb 2019 04:26
I must say, the visual combination of the deadly shark we come to love as Jaws and the family-friendly Ravensburger logo seems like an odd pair.
But consider me interested...

Jackwraith replied the topic: #293037 26 Feb 2019 08:10
Hrm. I was having an argument on another forum a while back about whether Jaws could be considered a "classic" film. The person arguing with me is a huge Godfather fan (as in, thinks there's a quote that applies to most situations) and I'm sure he thinks that Jaws was the beginning of the end for New Hollywood, since it triggered the era of the summer blockbuster over the more thoughtful films that had emerged from the new breed of directors like Coppola and Scorcese. My argument was that you could still see that level of personal storytelling in Jaws (the wine scene, the scar comparison scene, the hospital scenes) that sets it above the typical monster smashfest and it displays a more delicate touch than the vast majority of Spielberg movies (i.e. personal without becoming treacly.)

That said, am I eager to see the film once again reduced to a marketing tool? No. All of the other games that ever had the shark's head slapped on them were simplistic and obvious; sold because of the poster, not because of the film or the quality of the game. Is this one going to be able to replicate those personal moments I mentioned? Are you going to feel like you're playing Brody because you lose 1 action each turn in the Orca phase because of your fear of water or because you're struggling with the fear mixed with the guilt of responsibility and the lurking suspicion that your wife might leave you? On top of that is the fact that the game is essentially about finding and killing the shark; a situation that Spielberg has regretted for his entire career, since the creatures in question, especially Great Whites, are now threatened. Is this really the perspective you want to have in playing a game?

If other people are excited for it, have at it. But I look at this and immediately think of two questions: 1. How can this game possibly replicate those moments that made the film great (say, the moment when you can see Brody crumbling when confronted by Mrs. Kintner on the dock after being so thrilled to see a dead shark)? 2. Do I really want to be playing a game where the object is hunting down an endangered animal? My answers are "It can't." and "No."

hotseatgames replied the topic: #293039 26 Feb 2019 08:48
I have not played the Richard Launius game from a couple of years ago that is this exact game; I'm curious how they will differ. The name of his game escapes me.

I love the film, and would not expect a board game to touch on anything beyond the pivotal moments of surviving on the boat against all odds. I appreciate the sentiment of not wanting to kill a shark, but the movie makes it quite personal; this rather large for its breed shark has recently eaten several of your friends and neighbors, and your tourist town will literally fold if you don't do something.

Vysetron replied the topic: #293040 26 Feb 2019 09:01
You mean Shark Island? I forgot that was Launius. I haven't played but know people who have, and no one liked it. It had a weird blackjack mechanism for combat that threw them off.

I could see this working really well. Jaws isn't meant to be a real world situation, it's a panic movie. Man VS nature. That whole thing. I have doubts that this'll make the upper echelon of hidden movement 1 VS alls but I'd gladly try it.

bigal_tp wrote: My birthday is July 7th, and I was hoping someone that knows me well will buy me this game. However, my daughter's and I watch this movie every 4th of July, so I may have to buy it before to play it on the 4th.

Michael Barnes replied the topic: #299985 24 Jul 2019 00:12
People, I’m here to tell you that Ravensburger’s JAWS game is the real deal. Quit backing a bunch of KS bullshit and just go to Target and spend $29.99 on this masterpiece. I just played it with my kids and I’m blown away. This is exactly the kind of game I tend to like best- it’s in the same wheelhouse as Survive! and other “hobby adjacent” mass market games.

It’s really two games. The first party is Amity Island. Jaws has hidden movement, and goes around eating swimmers. You have to attach two motion tracker barrels to him. Quint toodles around on the Orca dropping barrels, and the Jaws player has to say if their movement triggers one. Brody runs around closing beaches at Mayor Vaughn’s office and picking up Barrels to take to the docks. He also uses his binoculars to watch the beaches. Hooper has a speedboat and a fishfinder and can deliver barrels to Quint. The more swimmers Jaws eats, the stronger he or she is in act 2...

...which is the Orca. Jaws secretly picks where to surface around the boat from three choices, the crew move around and target the spots with melee, ranged, or attachable weapons. Jaws pops up, and the crew hits, they roll damage or attach a weapons- such as a oxygen canister that can then be shot for extra damage. Jaws then bites either the ship or crew. Crew when’s when Jaws dies, Jaws win when crew is eaten or boat is wrecked.

This is SUPER fun. It’s actually a little heavier than you might expect in terms of rules, but once it’s going it’s easy enough and there are plenty of “oh, like in the movie” bits. The production is awesome, and it all captures the spirit of the film brilliantly.

What a game. I just kind of picked it up for a random Tuesday night activity. Is didn’t expect to be playing a possible GAME OF THE YEAR!

MB, please report back after a few more plays. I've read elsewhere that the 1st act is primo, whereas the 2nd act can often fall flat.

Josh Look replied the topic: #300010 24 Jul 2019 16:46
The second act is more interesting. It’s an entirely different type of hidden movement than what you’re used to. It might be more of a guessing game, but getting into the shark players head and calling them on their bluffs is one of the most satisfying gaming experiences I’ve had all year.

I had decided that it was my favorite Target exclusive game to date, but I’m going farther than that: Best Prospero Hall game to date. Yeah. Even better than that other one.
Read More...