Get Me Fresh Brain! 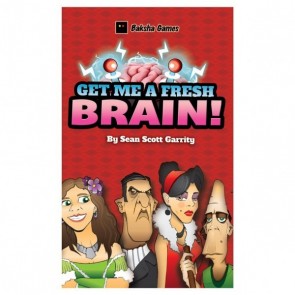 Game Name
Get Me A Fresh Brain!
Publisher
Baksha Games
Designer
Sean Scott Garrity
Year Published
2017
Genre
Card Game - Non Collectable
Baksha Games
Build your monster from available body parts around town and have it exact your revenge on other players. Other Evil Doctors have the same agenda, though, so it may come down to your monster fighting to the death!

Congratulations! You've just completed your Evil Doctorate! Now you've moved back to the small eastern European town where you grew up to start your revenge and build your first Monster.

You have to appear to be an upstanding member of society, so you have to hire some assistants to do your dirty work. Going and getting body parts, for example. The problem is that as you're just starting out and can't pay them very much, so your assistants aren't very reliable.

Once you finally get them to bring a brain, a torso, a set of limbs, and some supplies back to your castle, you can pay off your assistants and assemble your Monster. Then you send the Monster to town to destroy the buildings that you have been using. If you can destroy enough of them, you will win the game. If there are too many Monsters and not enough buildings for that, however, the Monsters will fight to the death to determine who wins!

This is a 2 - 6 player game, for ages 12 and up, taking 30-90 minutes to play depending on the number of players. It's an action-based game, where each player chooses one action for each of their three characters each turn.