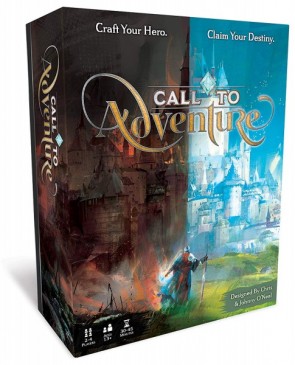 In Call to Adventure, players compete to craft the hero with the greatest destiny.

Inspired by the heroic storytelling tradition, Call to Adventure gives each player an Origin, a Motivation, and a Destiny. From there, players then take their heroes on an adventure where they acquire traits, face challenges, gain allies, and defeat adversaries. When the game is done, each player tells the story of their hero, from humble origins, to their grand destiny. With 15 Origins, 15 Motivations, and 15 Destinies, every game is different and provides multiple paths to victory.

Call to Adventure is the third title from Brotherwise Games, makers of the hit game Boss Monster. It is a mid-weight game that is crafted to appeal to Brotherwise's target audience of Boss Monster and Unearth players.

In the coming months, Brotherwise will be announcing planned partnerships with the world's top fantasy authors for branded expansions set in fans' favorite worlds. Call to Adventure's hero-crafting game system is infinitely expandable.

'Choose your Path. Craft your Hero. Claim your Destiny!'

Shellhead replied the topic: #293516 07 Mar 2019 19:53
Sounds potentially great, but I lost most of my interest when I saw this labeled as a deck builder/dice builder. Both deck and dice builders tend to ruin any sort of adventure theme by forcing a phony economy.

Oddly enough, I find that deck building tends to work great if the game has a sports theme, where the building aspect can decently simulate the impact of injuries, trades, and drafts on professional sports.

Shellhead wrote: Oddly enough, I find that deck building tends to work great if the game has a sports theme, where the building aspect can decently simulate the impact of injuries, trades, and drafts on professional sports.

Heroscape
5.0
A Aarontu
"A light and easy miniatures game enjoyable by gamers, causal..."