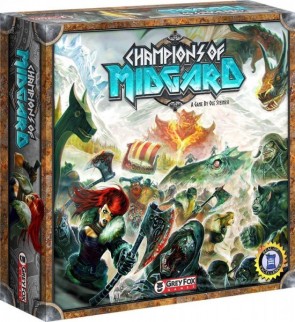 Trolls attack your town. Draugr terrorize nearby villages. Monsters strike at travelers and merchants alike. The people are suffering - will you be their champion?

Grey Fox Games is pleased to announce the release of Champions of Midgard - a Viking Era worker placement game with dice driven combat between players and mythical Norse beasts. The game has enjoyed much praise from playtesters and has received the Dice Tower Seal of Excellence!

This newest release is Grey Fox Games' largest game yet with an impressive list of components including a 20" x 30" board, 34 custom dice, wooden meeples, carboard tokens, and 121 monster, draugr, and troll cards. In Champions of Midgard players assume the role of a Viking Leader attempting to earn the title of Jarl in a besieged harbor town. They will collect the weapons, wood, and food needed to build ships, carve runes and send their warriors across the sea to defeat the most savage beasts and earn the glory befitting a champion.

"The combat is what sets this game apart from other games in the genre," says Joshua Lobkowicz, Head of Game Development at Grey Fox Games. "It's as approachable as Lords of Waterdeep but with the added thrill of rolling handfuls of Viking Warrior Dice in an attempt to kill awesome monsters."

Byzantium
0.5
N Nodens
"The setting could make for a terrific narrative. Sadly I..."