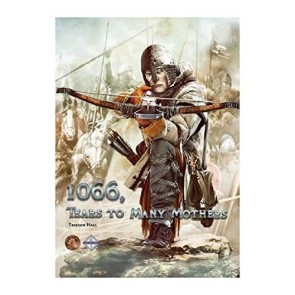 Recreate the infamous Battle of Hastings!

A promise has been broken, an evil omen is in the sky, a crown is at stake, and history is about to be made...

1066, Tears to Many Mothers is an asymmetric, competitive, tactical card game in the style of Magic the Gathering, but non-collectable. Each player, as either Normans or Saxons, musters troops and resources to overcome the various obstacles in their way before the two armies clash on the battlefield at Hastings.

Every card in the game is inspired by a real person or event from the time. With a focus on quick, tactical play and a thematic reimagining of the events of the time, there is no deck building required, each player simply grabs their deck and shuffles, then play begins.

Honours: 1066, Tears to Many Mothers was a runner up in the Golden Geek Awards, and was nominated in the Origins Awards for 'Best Historical Board Game'.

Note on title: In April of 1066 Halley's Comet was in its perihelion orbit and writers at the time said it was four times the size of Venus and shining with a light equal to a quarter of that of the Moon. Many thought it was an evil omen, or even the end of the world - the monk Eilmer of Malmesbury Abbey wrote about the event: "You've come, have you? You've come, you source of tears to many mothers. It is long since I saw you; but as I see you now you are much more terrible, for I see you brandishing the downfall of my country."

March 20, 2019
Rating
4.0
A tense, exciting and novel game with a refreshingly honest yet effective take on the vagaries of historical reconstruction, although it sometimes takes an arrow in its eye from too much luck.
MT
Matt Thrower #1 Reviewer 286 reviews
Comments (0) |