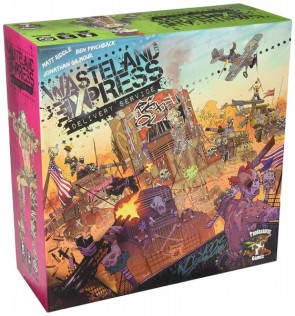 Take on the role of drivers inhabiting a post-apocalyptic wasteland riddled with outrageous, unhinged and otherworldly characters set on unleashing mayhem at every turn. In order to survive in this deranged universe, drivers must deliver food water and guns between the handful of settlements pockmarked through the Wasteland. If you want to survive you'll have to battle through the insane raiders who occupy the void between cities.

You'll take on missions from the three factions that have divided up the last of civilization and gain favor with them: the fascist New Republic Army which is hellbent on bringing the world to heel for its own good; the heretical Oracles of Ceres who have turned their attention to the worship of the land; and harvest, and the technologically obsessed Archivists who cling to the old ways and the hope of restoring our lost civilization. But what do you care? You're here to get paid and live another day free. Outfit your truck, hire some insane riders to help fend off raiders. Add some storage, and just keep truckin'.

The game will come complete with a emergent narrative story that will take place interactively over the course of 10 games. Each scenario will begin with a beautifully illustrated comic book introduction setting up the story line and the constantly escalating stakes and challenges set in front of players. Or players can dive in with a randomly generated scenario that will play out over the course of a single emergent story driven game session for infinite replay possibilities.

Pandemic
4.0
RB Ryan B.
"Pandemic is a cooperative game that has a lot of..."