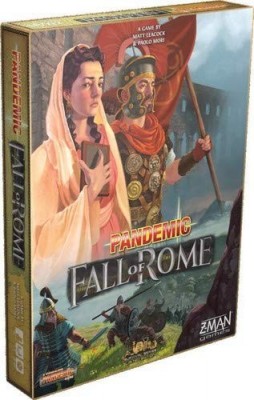 At the height of its power, the Roman empire covered A vast amount of territory and brought major advancements in engineering, architecture, science, art, and literature. Corruption and economic crisis has made the empire unstable and paved the way for aggressive Barbarian tribes to attack. Now citizens, soldiers, and allies of Rome must unite to protect the empire in Pandemic: fall of Rome! Raise armies, defend your cities, and forge alliances to ward off the relentless incursions. Can you hold the line against the invading hordes and prevent the fall of Rome?

Pandemic: Fall of Rome is a cooperative game in which players all win or lose together. Your goal is to ally with and/or eliminate each of the five invading barbarian tribes before the Roman Empire is overwhelemd. You and your teammates can lose in several different ways: if either Roma or too many other cities are sacked; if any tribes have overrun ROman territory; or if the Empire's resources have run dry.

Each player has a specific role with special abilities to improve the team's chances. Choose between the Consul, the Magister Militum, the Mercator, the Praefectus Classis, the Praefectus Fabrum, the Regina Foederata, and the Vestalis.

Solitaire rules provide additional options for a lone player, and after you're familiar with the game, you can use the included difficulty levels and the "Roma Caput Mundi" variant to make the game even more challenging.