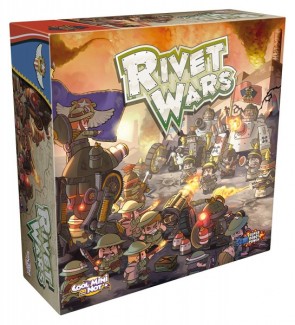 Rivet Wars is a miniatures board game from the imagination of Ted Terranova set on a world that never quite left World War I but with crazy technology like walking tanks, diesel powered armor, unicycled vehicles, and armor plated cavalry! But don’t let the cute visuals fool you; it’s a world full of angst, war-torn camaraderie, and dark humor. Rivet Wars: Eastern Front is a fast-paced, tactical, miniatures board game that brings real-time strategy-inspired gameplay to your tabletop. As commander of your forces, you spend resources each turn to deploy fresh troops to the front. Send out counter units to wreak havoc on your opponent's carefully laid plans. Deploy infantry, cavalry, artillery and massive walking tanks or call upon your faction's powerful heroes to enhance your force's strength. Drive forward, capture strategic objectives and smash the enemy's army!

Fury of Dracula 3rd Edition
4.0
V Vysetron
"Long, but worth it. The combat system in this edition..."

Doom: The Boardgame
3.0
S Shellhead
"Doom: the Boardgame is a thematic but repetitive dicefest that..."