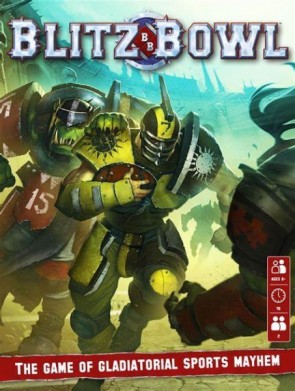 The teams are smaller and the games are faster than in Blood Bowl, but the action is just as intense as each player seeks to distinguish themselves in the eyes of Nuffle in the infamous Crush recruitment rituals.

The game features a number of elements that will be familiar to fans of Blood Bowl, meaning that the two games are ideal companions to each other. Players should expect to complete a game of Blitz Bowl within an hour and considerably less once they have a good grasp of the rules, making for a thrilling quick-play experience.
Tweet

Rating
4.0
Already have an account? Log in now or Create an account
A better bowl for blood
April 18, 2019
Rating
4.0
I'll refrain from a long comment for this fine game, and instead, I'll just say that James Hewitt is the latter day savior of Ameritrash.
C
Colorcrayons Top 50 Reviewer 10 reviews
Comments (0) | Was this review helpful to you? 1 0
Discuss this article
Log in to comment
Posts in discussion: Blitz Bowl