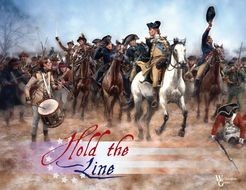 Take command of the American and British Armies in twelve great battles of the American Revolutionary War. You'll feel the battles come to life as the American Continentals and feared British Elites try to hold the line against each other at the battles of Long Island, Harlem Heights, Weitzel's Mill,Trenton, Hobkirk's Hill, Eutaw Springs, Bemis Heights, White Plains, Kings Mountain, Brandywine, and the double scenario covering the morning and afternoon battles at Monmouth.

The game comes with a beautiful hard mounted game board with hard mounted terrain tiles, counters and thick counters representing infantry, dragoons and artillery. The game also uses the Clash for a Continent system.

As British leaders you've told the American patriots to lay down their weapons or you'll lay waste to their homes. And as the Americans you have pledged your lives and fortunes in defense of all you value. Take the role of British generals Howe, Burgoyne, Cornwallis and others as you stake your reputation on defeating the rebel armies. As American generals Washington, Greene, Gates and others as you've precariously placed your army in their path... The enemy approaches, the sound of cannon deafens, men shout commands, smoke fills the air, can you HOLD THE LINE!

April 23, 2019
Rating
4.0
Very accessible, light, but technically interesting wargame. This is at the same level of complexity as Memoir '44 or Manoeuvre, but in some ways is much more free-wheeling. Games are quick, giving you the opportunity to play both sides and see which of you really has that wargame gift. Much recommended.

The original printing is beautiful, with thick cardboard counters that have great art. Nice production all around. The new version has little plastic guys if that's your thing, but either is a fine play.
S
Sagrilarus Top 50 Reviewer 30 reviews
Comments (0) |

The Settlers of Catan
4.5
J Jexik
"I wish more modern Euros were made in this style...."