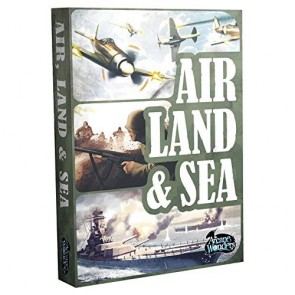 You are the Supreme Commander of your nation's military. To achieve victory, you must overcome your enemies in the Air, Land, & Sea. Strategically place your forces to secure theaters of combat and lead your nation to glory!

As a general, you must carefully deploy your forces across three possible theaters of war: air, land, and sea. If you can control two out of three of these theaters, you will win the current battle. But winning a single battle is not enough to win the game. And in fact, sometimes you may want to surrender and lose a battle on purpose in order to win the larger war.

April 02, 2020
Rating
2.0
Pretty pointless game of trying to build numbers on your side of three bases, while your opponent does the same. Feels a lot like Battle Line/Schotten Totten but with special powers instead of card sets. Play Battle Line instead.
MT
Matt Thrower #1 Reviewer 286 reviews
Comments (0) |