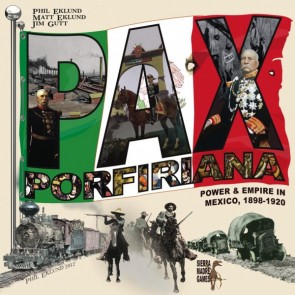 Pax Porfiriana – Latin for "The Porfirian Peace" – refers to the 33-year reign of dictator Porfirio Díaz, who ruled Mexico with an iron hand until toppled by the 1910 Revolution.

As a rich businessman (Hacendado) in the turbulent pre-revolutionary borderlands of the U.S. and Mexico, players compete to build business empires of ranches, mines, rails, troops, and banks while subverting opponents with bandidos, Indians, and lawsuits. Players win by toppling Díaz, either by coup, succession, revolution, or annexation of Mexico by the U.S. If Díaz remains firmly seated at the end of the game, then the player with the most gold wins.

April 26, 2019 (Updated: April 26, 2019)
Rating
4.0
Pax Porfiriana might not be my favorite Pax game, but it is perhaps the most pure, cutthroat one. The core feature of the Pax series is players fighting each other while simultaneously tilting the game state from chaos, to order and back again to their advantage. Porfiriana is the Pax game that has the sharpest knives---players can easily lose almost their entire tableau to other players and/or to game state changes. Compared to Pax Renaissance, you will gain and lose far more cards (easy come, easy go) in an average game.

The first time you pursue a red (revolutionaries) strategy while simultaneously plunging the board into recession---which bankrupts all the other players with their shiny, expensive toys, banks, and productive investments--- you'll know the true joys of Pax Porfiriana.
GS
Gary Sax Top 10 Reviewer 101 reviews
Comments (0) |

Rating
5.0
Already have an account? Log in now or Create an account
April 25, 2019
Rating
5.0
Engine-building, in a way, through the tableau that provides special abilities and income, but your engine is always unsteady and prone to collapse. Take that, certainly, but such moves will often give your opponent points. Simple card play, once you've got it - there are basically 6 card types and 9 actions, some of which are hardly used - and yet, the vast number of cards creates uncertainty and a different story every time. Lots of thematic touches (beyond the ridiculous amount of historical flavour text on each card) - using bandits gives the gunstore owner income; creating unrest on a plantation makes it prone to slave revolt, which could land you in jail. And above this sits the neat victory system that drives the game, in the form of the changing political regime that also changes the suit of victory points you need. Altogether, a magnificent thing that puts the player squarely into the Mexican Revolution, hands them a Mauser Carbine, 2 bandoliers, a posse of banditos and a steady stream of ill-gotten pesos and says, "dale, dale, dale".
M
mc Top 50 Reviewer 12 reviews
Comments (0) | Was this review helpful to you? 1 0
Discuss this article
Log in to comment
Posts in discussion: Pax Porfiriana

Lord of the Rings: The Confrontation
5.0
S Ska_baron
"Woah! Nice little game here indeed! I was introduced to..."