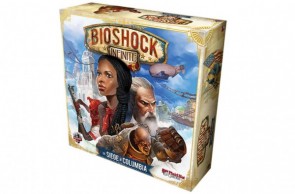 BioShock Infinite: the Siege of Columbia board game is based on the exciting BioShock Infinite video game. Set during the same series of events as the video game, players take on the role of the Founders and Vox Populi factions, desperately seeking to seize control of Columbia. Players will command mobs of combatants and set them against their opponents, striving to lay claim to the city's bitterly contested districts. Challenging objectives offer tempting advantages, as each side uses their might, influence and resources to claim victory.

The Sky-line: Will your troops ride the rails to cut off enemy forces, or will they zip blindly into a trap?

Booker & Elizabeth: Unpredictable and dangerous, Booker and Elizabeth will force players to reconsider their strategies as the two cut a path through the burning city.

Powerful Leaders: Command important characters straight from the video game, such as the nihilistic Daisy Fitzroy, or the terrifying Songbird.

Tightly-balanced Resources: Will you overwhelm your enemies with superior numbers, or will you focus on controlling the conditions of the war? BioShock Infinite: the Siege Columbia forces players to make tough decisions at every turn.

Ticket to Ride
4.0
S Ska_baron
"Great for playing with light gamers or folks in the..."