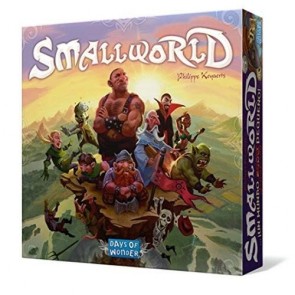 Small World is designed by Philippe Keyaerts and is a fantasy-themed game similar in game play to his Vinci, which was released in 1999 by French publisher Descartes. In Small World, players will be able to control characters from 14 fantasy races - dwarves, giants, orcs, elves, and so forth - while trying to take control of territory and push opponents out of adjacent lands and off the map. Even while dominating opponents, however, you have to keep in mind that your race's civilization is doomed as well, thanks to the passing of time and attacking of neighbors, so be ready to cast aside one tribe while taking the reins of another in order to keep dominating the world.

Small World is for 2-5 players and contains two double-sided gameboards, with one side being used for each of the different number of possible players. The 14 fantasy races come with matching banners and tokens, and the game also includes 20 special power badges to further customize the races along with mountains, troll lairs, fortresses, holes-in-the-ground, victory coins. and other items.

Rating
2.5
Already have an account? Log in now or Create an account
April 30, 2019
Rating
2.5
Would play again, don't mind if I don't.
N
Nodens Top 50 Reviewer 31 reviews
Comments (0) | Was this review helpful to you? 0 0
Discuss this article
Log in to comment
Posts in discussion: Small World