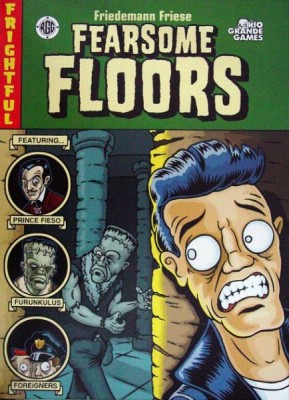 It was fabulous! Fearlessly, you found the 3 fetishes in the Finnish fjord. With light-footed and foxy feints you ferry the fetishes to prince Fieso in France to free the fascinating faerie Fabula. But Fieso is not fond of foreigners, what a fiasco! You land freezing and foolishly find yourself trapped in a frightful fortress with sinister corridors. Now you must flee Fiesos trap. Furunkulus, the monster, is a frightening freak, especially fond of foolish foreigners. He will feed on you if he is able. So you want to fool Furunkulus and flee to freedom.

Fearsome Floors is a racing game with a twist. Not only must you be fast to the goal, but you must also avoid the monster Furunkulus along the way.

Through clever moves, the players try to move the monster so it goes after other players. Plan carefully, move quickly to the goal, and avoid the monster

Rating
3.5
Already have an account? Log in now or Create an account
Furious Fundament
August 20, 2019
Rating
3.5
A light romp that plays fast with 7p as long as they...

...play fast. I can see how this could bog down hideously if folks got too thinky with it. Keep it quick and it's great fun!

9 plays later: Yeah, hurry up with your goddamn turn—we're running from a monster, not amortizing fees in a derivative financial instrument. If you're pokey I swear to God I'll sacrifice Sparky the dog just to lure the monster into the middle of your molasses-pants pack.
H
HiveGod Top 50 Reviewer 54 reviews
Comments (0) | Was this review helpful to you? 1 0
Discuss this article
Log in to comment
Posts in discussion: Fearsome Floors