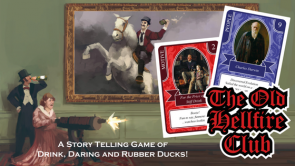 Legendary are the tales told of The Hellfire Club. Since time immemorial we have decided the fates of Empires. How times have changed...

In The Hellfire Club two to eight players take on the roles of the destitute final members of an ancient aristocratic secret society as they recount­ the tales of their greatest adventures to the patrons of the shadiest public houses of Old London Town. Drawing on the cards in their hands for inspiration, the players will weave an ever more elaborate (although far from honest) tale of daring and adventure in the hope that the drinking den’s patrons will offer them a penny for their woes. As competition for the pennies on offer increases, so too do the exaggerations and outright lies the players will tell about their role in the story in the hope of making themselves seem more deserving. But watch out – at any time another player can challenge your version of the story by playing a less impressive card from their own hand thereby revealing your exaggeration and taking the rewards for the story that would otherwise have been yours! When the tale reaches it’s thundering climax, whoever has been given the most pennies wins the game!

The Old Hellfire Club is a storytelling card game featuring push-your-luck and memory mechanic that add a spark of tension to an otherwise hilarious game. At its heart is the deck of 100 Boast cards. The Boast Deck includes 100 cards in 10 suits themed around a full spectrum of Victorian melodrama from motives and perils to crimes, insults, and teatime and each illusstrated with an excerpt from an original Victorian era masterpiece! Players cooperate to tell a story including the plot elements from their own cards, but opponents can challenge the active player’s boasts by playing less impres­sive cards of the same suit with lower values. Thus, lies are unmasked, embarrassing truths revealed and any pennies earned by the active player that turn are lost!