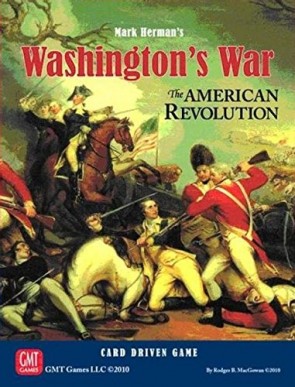 Washington's War is a card-driven game on the American Revolution.

It pits the forces of King George III against the American colonists as they fight for their independence. In Washington's War you assume the role of either the King of England as he tries to bring his rebellious colonies back into the Empire while at the same time dealing with a global war against ancient enemies bent on revenge for their losses in the Seven Years War; the Continental Congress as they battle the forces of England while trying to rally their countrymen to the cause of liberty. Washington's War is not just a re-tread of my earlier design on the same subject but a true re-design that is keeping the basic feel while simplifying and speeding up what was already a fast paced game.

The game also features a new CDG discard mechanic that enables a player to play a discarded event for the cost of an operations card. Now unusual card distributions create challenges and not insurmountable barriers to push your strategy forward. Washington's War is being broadly tested on the internet to give players a voice and a source of input prior to publication. What was old is new again. Be the man on the white horse and forge a nation or save an empire. Designed by Mark Herman