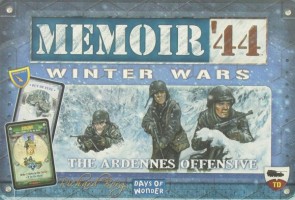 As would befit your ration pack if you were about to embark on one of the coldest and most bitter fights of the war, after 5 long years of weary battles, we have packed this expansion with every thing you could ever need to combat in a snow-covered environment.

These will all be critical to fighting (and winning!) the ten scenarios this expansion contains, all focused on those crucial 2 weeks of Christmas 1944 in the Ardennes.

The first six scenarios included are all standard scenarios, playable with a single base game and this expansion alone (though a Winter/Desert board will add a nice cosmetic touch to your battlefield).

The four scenarios that follow are gigantic Breakthrough renditions of the Battle of the Bulge. These will require a single copy of the already released Eastern Front expansion, and the Breakthrough kit of board maps, in addition to the aforementioned expansion.

Rating
4.5
Already have an account? Log in now or Create an account
No Christmas Truce in WWII
September 03, 2019
Rating
4.5
Wow. Just... wow. Everything about this set is completely off the charts. The art on the terrain hexes is gorgeous and evocative, the winter rules make the game feel exactly like you'd expect—vehicles are slowed and you can't see much of anything beyond immediate contact. You can fire into the fog and hope for the best, or you can maneuver into close combat and savage each other. Tense and brutal.

The Winter Combat cards add a huge amount of thematic immersion and crazy turns of event. I have watched what should have been dramatic, game-winning turns (Their Finest Hour) end up completely repulsed and negated by a couple of flopped Winter cards. Out of Fuel, Out of Ammo, and, oh, an Ambuscade, to boot! Sorry 'bout your offensive, there.

Love it.
H
HiveGod Top 50 Reviewer 54 reviews
Comments (0) | Was this review helpful to you? 1 0
Discuss this article
Log in to comment
Posts in discussion: Memoir '44 Winter Wars Expansion

Galaxy Trucker
3.5
H HiveGod
"Man, what a letdown. This looked great, and I feel..."