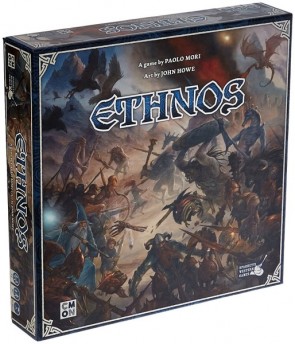 Only a wise and brave leader will restore Ethnos to its former glory.

Unite the tribes, battle for glory, and rule Ethnos.

At the end of the last age, the rulers of Ethnos left the six Kingdoms without leadership, and scattered the twelve ancient tribes across the land. A once-prosperous and glorious empire was reduced to ruins. Now, it’s the dawning of a new age, and you have a chance to unite the members of the scattered tribes and take control of the Kingdoms under one rule, once and for all!

In Ethnos, you recruit different Tribe cards into your hand, form them into Bands, and play them to assert your control in one of the six Kingdoms. Over the course of three ages, you battle with opponents in a war for dominance and glory. Each Band has a Leader, and only the Leaders can tap into their tribe’s special abilities. Each of these abilities will give you a special advantage, but finding the right Leader for each assault is the key to victory. As the war rages on, more and more glory will be gained for controlling a territory. After three ages of political maneuvering and battles, peace between the six Kingdoms will be restored under a new ruler. If you are wise in your recruiting and make well-planned assaults, you may just rise to the throne.

Axis and Allies
KB Ken B.
"She hasn't aged all that well, she's still too long..."