Meltwater: A Game of Tactical Starvation 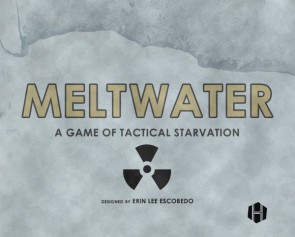 19XX: The unthinkable happens. The world is scoured clean in nuclear fire. The oceans are poisoned for generations to come. One last patch of habitable land remains: Antarctica. The remnants of humanity huddle together in a fragile patchwork of research stations and refugee ships. But even here, the Cold War survives. And our civilization may not.

Meltwater takes the nihilistic militarism of the Cold War to its logical and apocalyptic extreme. The result is a dark and brutal contest in which both sides seek the total annihilation of the other even after the world has been ruined, regardless of the cost in human lives and suffering. Antarctica's radiation free zones shrink with every sunset, hurried along by combatants that continue to hurl nukes at one another. But the key to victory lies in forcing the enemy - soldiers and civilians alike - to starve to death. When the enemy's population - men, women, and children - have all defected or died, the surviving superpower wins. They might even have time to celebrate in the moments before they, too, are snuffed out by the poisoned earth.

Meltwater is a bleak satire, a compellingly nasty two-player game, and a pointed critique of unchecked military spending in an age where a fraction of that money could end world hunger. Hollandspiele is proud to release this stunning debut from designer Erin Lee Escobedo.

You can find the Print-and-Play version here.